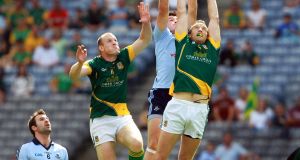 Joe Sheridan and Anthony Moyles of Meath contest a high ball with Dublin’s Niall Corkery during the Leinster SFC semi-final of 2010. It is the only loss Dublin have suffered in Leinster since 2004. Photograph: Donall Farmer/Inpho

It lasted just over seven years. Dublin went from June 10th 1973 until 27th July 1980 winning all of their matches in the Leinster football championship. The run also equalled the record of the great Wexford four-in-a-row All-Ireland winners of 100 years ago, who managed six successive provincial titles.

This weekend Dublin will attempt to negotiate the penultimate hurdle to making history in this summer’s championship when they face Westmeath in the provincial semi-final hoping to win an unprecedented seventh Leinster title in a row.

Sunday will also see Dublin on the trail of another unbeaten sequence. Just a couple of months after Kerry ended the champions’ unbeaten two-year run of 34 league and championship matches, Jim Gavin’s team can clock up what would be a 20th consecutive victory in the province.

Although the team of the 1970s had their sequence halted at 22, their modern successors with just two potential fixtures left, will need to outstrip Kevin Heffernan’s side by going into an eighth championship unbeaten if they are to emulate that figure in a year’s time. Dublin’s record is even more phenomenal when looked at over the past 12 years.

The county’s most recent championship defeat, by Meath in 2010, is the only one the county has sustained since 2004. That’s 37 of the last 38 matches in Leinster unbeaten.

The seventh anniversary of that setback falls this weekend. At the time it looked like the end of the road rather than the start of a journey that would yield four All-Ireland titles in six seasons.

Under Pat Gilroy, Dublin had adopted more of a defensive focus, which had led to the county’s best league in a number of years. But, at the start of the championship, Wexford nearly beat them and it required extra-time for Dublin to scrape through.

If that was a malfunction, in the next match Dublin’s defensive system crashed, as Meath scored five goals to send the champions packing in the Leinster semi-final. Anthony Moyles was wing back on the Meath team that did the damage.

“We were never that far away even when we weren’t going well,” he said. “I watched it back about a year ago and it was actually quite a close game because Paul Flynn rattled a shot off the post [in the 47th minute] when they were just three points behind. Literally from the next play we got a goal and shortly afterwards, another so it changed quickly.

“We knew if we got our match-ups correct in our own defence and midfield that our forwards would have enough guile. We never had many issues with our forward play; our problems were more at the back.

“I was right half back on Niall Corkery, who was a big figure for their kick-outs so I went on him to try and take that threat away but it happened in the blink of an eye and we six or seven points up.”

The established narrative was that Dublin were experimenting with a new system and that its malfunction led to the shock defeat but, seven years on, it’s surprising to see how many of that team would go on to play their part in the first All-Ireland win in 16 years, which took place a short 15 months later.

Fifteen of the 19 players who played that day in 2010 would take part in the defeat of Kerry in September 2011.

The immediate trajectory of both counties was also surprisingly divergent. Despite the devastating defeat, Dublin recovered to leave a mark by progressing through the qualifiers to an All-Ireland semi-final, which was only narrowly lost to eventual champions Cork.

Meath would win their only Leinster title in last 16 years but only after a whale of a controversy when a clearly invalid goal was awarded to Joe Sheridan in injury-time to deprive Louth of a first provincial win in 53 years.

“One went one way and the other, the other!” said Moyles. “They had a lot of the same players, added a few and got their system right while we had the debacle with Louth that year and I believe that weighed very heavily on the team.

“In the quarter-final against Kildare they got a goal just before half-time and we just fell apart. The dressing-room I remember was a mess at half-time. There were arguments and different things going on and then unfortunately Eamon O’Brien and the lads got the gate. That completely disrupted everything. It was unfair that they got the blame because I felt that things were moving in the right direction.”

He is philosophical about the contrasting fortunes.

“I’ve actually spoken to Pat Gilroy since about it at an event we were both at,” according to Moyles,” – even some of the personnel didn’t change that much. They probably changed their set-up a bit, not getting caught forward as much but it was just one of those freaky games.”