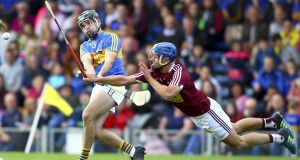 Tipperary made desperately hard work of seeing off Westmeath at Semple Stadium before booking their place in round two of the All-Ireland senior hurling championship qualifiers.

Goals in either half from John ‘Bubbles’ O’Dwyer and John McGrath were enough to see the Premier County past a gritty Westmeath outfit.

But Tipp were just three points clear – 1-12 to 0-12 – when debutant goalkeeper Daragh Mooney denied Westmeath’s Cormac Boyle a goal with a fine save in the 53rd minute.

That’s in sharp contrast to the 31-point whipping the county’s senior footballers suffered against Dublin last weekend – and this was a display to be proud of from the hurlers.

In front of 6,893 spectators, Tipp were really poor and while they led by 1-10 to 0-9 at half-time, they went 18 minutes without a score from the 19th minute until stoppage time at the end of the half.

The hosts, playing with the breeze in the second half, lost Niall O’Meara to a serious ankle injury and below-par forward Séamus Callanan was subbed off.

John McGrath came off the bench to score a late goal – and add some gloss to the scoreboard – but Tipp will have to improve significantly to trouble superior opposition in seven days’ time.