Both sides kick 16 wides in disappointing contest at MacCumhaill Park 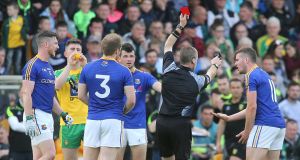 Longford will look back on this game with regrets. They had 16 wides and lost their entire half forward line to black and red cards as Donegal stumbled over the line to victory in MacCumhaill Park in Ballybofey.

When James McGivney saw black and red in the 48th minute, Longford were level at 0-5 apiece and really should have been three or four points to the good.

“The massive turning point in that game for us was the sending off of James McGivney,” Longford manager Denis Connerton said afterwards. “It was a game that, I thought, was played in very good spirit. I felt for us to get three black cards, and one of them to end up with a red was very, very difficult for us.”

Donegal went on to outscore Longford 0-6 to 0-2 in the 25 minutes that were played after the sending off, but looked far from convincing. Apart from Patrick McBrearty they were bereft of any sting in attack and ending up bringing experienced players off the bench to get them over the line.

One of those was Martin McElhinney, who came in before half-time to hit two good points, but they mostly relied on McBrearty and Michael Murphy from placed balls.

“It was a very flat performance,” Rory Gallagher said afterwards. “Longford obviously made it difficult but we did not do enough to break them down and missed too many chances.

“We are in the hat for next week and that is where we wanted to be. We would have loved to have played better, but at the end of the day we won and that is the most important thing, we edged it out.

“It is not easy. Longford have good pedigree in the qualifiers; we knew, they were well flagged.”

The first half was one of the worst games of football seen at the venue for a long time. Longford led 0-4 to 0-3 at the break with Martin McElhinney getting the only point from play.

Indeed, there were 50 minutes on the clock before Longford got one of their two scores from play, corner back Diarmuid Masterson coming forward to show the way.

The quality of the fare on display did improve a little after the break but by the end both sides had amassed 16 wides each.

There were few lasting memories for the impressive attendance of 9,915 apart from one point from Jamie Brennan in the 58th minute, which saw good approach work by McElhinney, Murphy and Karl Lacey.

Longford had probably the only goal chance of the game in the opening half but Robbie Smyth’s effort to flick over his head went just the wrong side of the post.

On the evidence of this game Donegal have not got over their Ulster semi-final exit to Tyrone and will need huge improvement if they are to stay in the championship beyond next weekend.