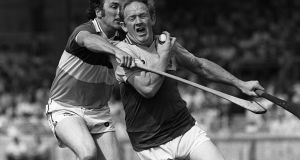 Tony Doran in action for Wexford against Offaly in 1984. “We happened to come up against strong Kilkenny teams all along the line and then Offaly emerged as well.” Photograph: Billy Stickland/Inpho

Wexford hurling teams are like forest fires. They catch without warning and the blaze is instantaneous and intense. Sunday’s Leinster final appearance has that kind of feel about it.

All week, there has been talk of up to 30,000 tickets sold in the county and the attendance may eclipse the 1997 gathering when Wexford and Kilkenny met in the provincial final. Tom Dempsey played in that match but believes the excitement is even bigger this time around.

“It’s funny, there is a huge buzz but the expectation is just okay. It’s not crazy. People know that Galway are outright favourites to win on Sunday and to me they are the form team of the championship. So it’s not like Wexford people are talking about winning All-Irelands or anything like that. They are just enjoying the moment. They are contenders and that’s enough. Things can go right and wrong.”

That could almost be a motto for Wexford hurling. Above all hurling counties, it is difficult to categorise the purple and gold tradition. Six All-Ireland titles wrung from 20 Leinster championships wins is no poor return and places Wexford secure in the roll-call of pure diamond hurling counties.

The legacy of the Rackard brothers is at the forefront of a charismatic mid-1950s team which effectively reimagined Wexford as a hurling county. Art Foley’s save against Christy Ring in the 1956 final has become folkloric and the spontaneous reaction of Nick O’Donnell and Bobby Rackard, who chaired Ring around Croke Park in appreciation after that game, is one of the most celebrated moments in Gaelic games.

Wexford’s second coming in 1996, led by the rapturous Liam Griffin, was arguably the high point of an expansive decade for hurling. So Wexford’s identity is a vivid part of a grand tradition but also independent and bound to a sense of cause. It has never been part of the establishment.

“It’s a hard one,” Dempsey says of where Wexford fits. “Our tradition seems to suggest that we win an All-Ireland every 20 or 30 years. There is a huge love of hurling here. We always had a pretty big population playing hurling. But of course there were worries and will be again.

“Hurling is the one sport that supersedes everything in Wexford. I don’t remember Nicky Rackard but his statue is down in Wexford and the most sung song is Cuchulainn’s Son whenever Wexford hurling has a big moment.

“There are no youngsters even now who don’t know of Nicky Rackard. That 1950s team came from the blue and they marked the rebirth of the new tradition of Wexford hurling. And we have had heroes since – Tony Doran and the Quigleys and George O’Connor and Martin Storey. Maybe some times we can be a bit down on ourselves in Wexford. But the passion for the game here is huge.”

Tony Doran was in the crowd when Wexford beat Kilkenny on June 10th, a date that is etched now in the Wexford hurling slate. He won his only All-Ireland in 1968, was named Texaco Hurler of the Year in 1976 after Wexford lost the first of two successive All-Ireland finals to Cork and retired in 1984, a period which coincided with a sharp dip for the county.

“It is hard to put a finger on why. I suppose one of the big problems is that we happened to come up against strong Kilkenny teams all along the line and then Offaly emerged as well. In the 1960s and 1970s Leinster was probably a two -horse race. Wexford were sort of assured of second place in the province. But our worst time has probably coincided with the back door,” he points out.

“The last year of the straight knock-out was 1996 when we won the All-Ireland.”

The Wexford team of late 1960s emanated from the dramatic revival of the game brought about the 1955 and 1956 All-Ireland teams.

“That team really took hold in the imagination of Wexford people,” Doran says. And it moved the county from a football tradition to a hurling tradition. Hurling has been the predominant game since then.”

What didn’t change was Kilkenny’s enduring hurling standards. From 1971-75 inclusive, just three years after celebrating the All-Ireland and one year after facing Cork in an All-Ireland final, Doran and his team -mates found themselves penned into Leinster by Kilkenny for five consecutive years.

“It’s nearly impossible, I think, to compare teams of different eras,” Doran says. “That Kilkenny team won three All-Irelands and were regarded as one of the greatest teams of all time. I suppose then the team of the last 15 years has surpassed all that in what they have won and the style they won. But it is hard to compare because they both had a lot of outstanding individuals.”

Those games made a lasting impression on the hurlers of Tom Dempsey’s generation. His childhood memories of those 1970s Leinster finals are of “incredibly atmospheric occasions”. Summer hurling invariably meant coming up against Kilkenny. In many ways, the stripy men defined not only Wexford’s championship but their hurling existence.

“That was the only downside in that we were living beside the elite of the elite,” Dempsey acknowledges.

“And we were meeting them very early in the championship. So it became a nightmare because we were using them as a barometer and then suffering heavy beatings which affected their season. This Kilkenny team was so good that we were nearly always the team that got the first brunt of them and didn’t do our confidence any good.

“And look, Kilkenny could come back this summer and beat Wexford in a quarter final or semi-final this year. But I was brought up watching players like Tony Doran and we were always in with a chance. That evaporated for a number of years. So that is why the emotion in Wexford Park was so incredible that day. It handed that bit of hope to Wexford people.”

It was a Waterford man, John Mullane, who perhaps best captured the extraordinary local happiness generated by Wexford’s win that day in his radio commentary. Just two years earlier, Liam Dunne had brought his promising young team into Nowlan Park only to see Kilkenny run riot and decimate them by 5-25 to 0-16.

It was a bruising day for the county and personally for Dunne, whose five years as senior manager were defined by a selfless commitment to recalibrate Wexford hurling. At times, his teams played thrilling hurling and at times, they flickered with uncertainty.

“I was involved with Liam when he had a lot of those players in development squads and he did so much work,” Tom Dempsey. “Players like Lee Chin and Conor McDonald didn’t just fall out of the sky. There was a lot of good coaching done. And Liam’s squad was devastated with injury last year and he never really got a chance to see what they could do. So he did a lot of good work.

“And then Davy [Fitzgerald] came in and has given the entire county this huge injection of energy. And yeah, Wexford loves him. If you marry a guy like Davy with a passionate group of supporters like we have in Wexford, there is only going to be one result. But he has been astute too. He has got the tactics right and players are very comfortable in the game he has put in place.”

The combination of Davy Fitzgerald and Wexford held the promise of intoxication from the beginning. From his arrival in the county in the depths of winter, the Clare man went to pains to keep expectations under wraps even as his team went to Salthill and beat Galway in mid-February on their way to promotion from Division 1B with a perfect record.

It led to the strange situation in which Fitzgerald was the most talked about and least seen GAA figure in the country. But his ability to conjure up a tempest of energy and positivity within months of taking over teams has brought Wexford back to a state of mind that they haven’t really visited since 1996, under Liam Griffin’s singular evangelism. Wexford’s rush to that year’s All-Ireland final included a semi-final win over Sunday’s opponents, Galway.

“They had hammered us in the league semi-final that year and were touted as the best team in Ireland that summer,” recalls Dempsey. “And looking back, maybe they were. They had something like 17 wides against us that day and got three goals. But they were favourites to win that day and they just didn’t get over the line.”

Like then, Galway enter tomorrow’s match as favourites, as league champions and as a team many feel can finally close in on a senior title that has eluded them since 1988.

It will be Wexford’s first Leinster final meeting with Galway and although the counties met in the 1955 All-Ireland final, there is no particular rivalry between them. If anything, they share a reputation for inconsistent brilliance, storming the high houses of hurling every so often. For once, Wexford come into a Leinster final as upholders of the old guard of the province. But they are still the outsiders too.