Donegal limp past Longford in a festival of wides

In a poor encounter in MacCumhaill Park, the favourites eventually came out on top 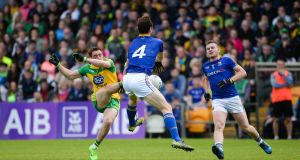 Martin Reilly of Donegal has his shot blocked by Barry Gilleran of Longford during the GAA Football All-Ireland Senior Championship Round 2A match between Donegal and Longford at MacCumhaill Park in Ballybofey. Photo: Oliver McVeigh/Sportsfile via Getty Images

Donegal are into the next round of All Ireland Senior Football Championship qualifiers, but only after a very poor display in MacCumhaill Park against Longford.

It was a day that the forwards of both sides will want to forget, but the Longford side will rue 17 wides, some of them very poor. They also had the only goal chance of the game.

Woeful is the only word that could describe the opening half as the two sides on view bore no relation to what you would expect from intercounty teams.

Two points from play and 19 wides – Donegal had 10 to Longford’s nine. And the fare on view for the excellent crowd of 9, 915 was far from exciting.

Longford held a one point advantage at the break, 0-4 to 0-3 and were deserving of the advantage. They lost wing-forward Daniel Mimnagh to a black card on 24 minutes.

However, they relied totally on freetakers Robbie Smyth and David McGivney for their scores, McGivney getting three of them. They had a great goal chance on 22 minutes when a high ball in was flicked on by Smyth, but just wide of the goal.

Donegal were just out of sorts and were again limited by a tight Longford defence. A Michael Murphy free from 49 metres out was their only score of the opening 20 minutes, while Patrick McBrearty had the first point of the game from play on 22 minutes. The only other Donegal point came with the last kick of the half from substitute Martin McElhinney.

The fare improved slightly in the second half, but that was mostly from the home side. Longford did get a point eventually from play from corner back Diarmuid Masterson, but Donegal hit three points in as many minutes to open a three point lead, 0-9 to 0-6.

By that stage Longford were down to 14 as they lost centre-forward James McGiveny to a second yellow card.

As Longford continued to kick wides, Donegal limped over the line. In the end Longford accumulated 17 wides to Donegal’s 15 – surely a record in itself for any game.