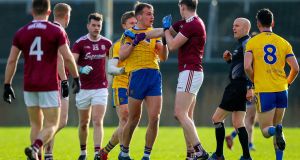 Roscommon won their third FBD Connacht football league title in the last five years as Anthony Cunningham side warmed up for next Saturday’s national league with victory over Galway at Tuam Stadium.

Donie Smith kicked five second-half points and added eight to his side’s tally in total, as Galway fell away after Barry McHugh goaled for Kevin Walsh’s side early in the second-half.

Cunningham will bring his side to MacHale Park next Saturday night for their first game back in the top flight, while Galway face Cavan in Pearse Stadium. Confidence will be high in one camp and scarce in the other after this game.

As well as impressing in front of goal where they only kicked two wides, Roscommon proved very hard to breakdown for Galway, although the six scores that Galway accumulated came with 12 wides and another three chances dropped short.

But it was the steely side of Roscommon’s game that stood out, and Cunningham said he was happy to see his side perform with that passion.

“It was a satisfactory performance and they showed a bit of mettle there today, but we still have a long way to go,” said Cunningham

“I suppose from last few years we are still working on it [DEFENCE]. It’s a work in progress right through the team. You’d have to look at it defensively for the last couple of years. The lads are able to play there is no doubt about it, it’s just coaching and practicing and getting that bit cuter.

“You have got to learn these things. You can’t train for a lot those things and practice a lot of those things because you get a sucker punch but it’s how you react. We go through that quite often with the players. Hopefully they’ll build from that, but it’s massively competitive and they’re going to have to learn.”

This was a game that was pockmarked with flash points. Each half was spoiled by cards - one red to Galway’s David Wynne, four black cards and 13 yellows were shown by Liam Devenney - and the referee certainly wasn’t helped by either team’s attitude.

Galway manager Kevin Walsh admitted that he was impressed by Roscommon’s performance and annoyed by his own side, but he noted that form can be hard to deliver consistently at this time of the year.

“There is always a hard edge about Roscommon. To be honest I would say we are maybe a bit disappointed in our own side, there might be a bit of a softer edge in our own performance. They have done the basic right and that wasn’t good enough,” said Walsh.

“Again, as I said about the eight yellow and the three blacks and the one red, either we have a serious discipline issue from today or there is a mixture of some stuff that didn’t really happen that was pulled for nothing.”

Perhaps the most worrying thing to come from the game is Galway injury list. They are likely to face Cavan without Declan Kyne who picked up an ankle injury and Cillian McDaid who sustained a hamstring injury in the warm up, while Damien Comer and Paul Conroy are not expected to feature, as well as the seven Corofin players who are still in club action.

“We don’t know who’ll be available. Whoever we had today we might have one or two back.

“We are very deep into (the panel). But when you go in the panel deep and there is one or two or three that might step up later in the year that’s your gain. For that to happen maybe we have to have some pain along the way.”