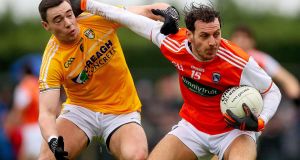 Jamie Clarke: has returned from his travels to add substantial craft and guile to the Armagh forward line for the McKenna Cup decider against Tyrone. Photograph: Tommy Dickson/Inpho

Armagh are already looking stronger this year, especially in attack with Jamie Clarke back from his travels and sufficiently enthused to be playing McKenna Cup. Stefan Campbell has also ended his exile.

Tyrone are hit by the Sigerson clash but Mickey Harte has been able to bring in a raft of last year’s championship team. Armagh had good wins over Monaghan and Donegal and will give this a rattle but Tyrone have to be favourites.

Walsh Cup final, Leinster SH Galway v Wexford, Bellefield, Enniscorthy, 2.0 – Interesting semi-finals a week ago gave Wexford another win over Kilkenny in the competition and it was the familiar strength of Paudie Foley’s free taking – which nearly kept them afloat in the championship last year – that saw them home.

Galway effectively had to beat Dublin twice and although there was a good run for some younger players, Joe Canning was still on hand to come in and cut over the winning line ball.

All-Ireland club IHC semi-final: Graigue-Ballycallan (Kilkenny) v Charleville (Cork), Semple Stadium, 2.0 – Blast from the past with Ben O’Connor managing Charleville and Eddie Brennan still assisting the Graigue cause. Darragh Fitzgibbon has been outstanding for the Cork champions and they could spring a mild surprise. Verdict: Charleville

FBD Connacht SFL final Galway v Roscommon, Tuam Stadium, 1.30 – The semi-final win was more satisfying than impressive for Galway but keeping Mayo in their slipstream even at this time of the year was gratifying, especially as James Horan’s team were anxious to halt the recent trend on the manager’s return.

Roscommon have been regulars in this fixture, winning two finals. A big year for both counties, as Anthony Cunningham’s team face a torrid campaign in Division One whereas Galway need to kick on in championship in the summer months to come.

Cillian McDaid’s return from Australia is a boost, as is the involvement of some Corofin players in the weeks before their All-Ireland club semi-final.
Verdict: Galway

Pride of place on a big weekend for clubs around the country goes to junior hurling semi-finalists Carrick, the first Leitrim club to win a Connacht title and within one match of becoming a rare hurling side from the county to play competitively in Croke Park.

Sigerson Cup round one IT Tralee v Ulster University, John Mitchels, 1.0 – The Ulster galacticos, bristling with Tyrone and Donegal talent, look straightforward prospects against a home side, minus injured All Star and YFOTY David Clifford.

Queens University Belfast v Maynooth University, The Dub, 2.0 – Despite the journey, Johnny Doyle’s Maynooth – impressive in the league and boasting some of Kildare’s under-20 talent – are favourites to take this.