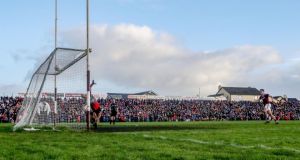 Provincial secretary Michael Reynolds: ‘The whole question of addressing the problems of club fixtures requires certainty and that means on-the-day finishes in as many matches as possible’ Photograph: Bryan Keane/Inpho

The GAA’s moves to standardise same-day outcomes in certain fixtures, including the motion to adopt penalty shoot-outs at Saturday’s Central Council meeting, will tidy up what has become a key strategy for the association in recent years.

There have been two main approaches to the gradual reduction of replays: instituting extra time and more recently the introduction of protocols to decide certain matches on the day.

The latter have been in the spotlight during the past week with some high-profile penalty shoot-outs in the secondary provincial competitions. At the weekend Dublin beat Meath on penalties in the O’Byrne Cup semi-final and a day later Mayo were involved in a second such conclusion in a week, this time coming up short against now perennial tormentors, Galway.

Within the GAA there is a feeling that to have introduced the penalty shoot-out immediately might have created one of those culture wars over what does and doesn’t in the words of the old phrase “smack of a foreign code”.

Instead, the more distinctive sudden-death competition based on 45s and 65s was brought in last season and had its highest-profile demonstration in the league quarter-final between the hurlers of Clare and Limerick, a 65-metre shoot-out that meant the contest had lasted three hours before Limerick came out on top.

The free-taking procedure in football was amended last April to have the kicks taken from 33 metres rather than 45.

Currently, regulations governing “winner on the day” provide for two 10-minute periods of extra time, followed two further periods of five minutes and after that a shoot-out.

They apply to a number of fixtures at the highest level: knock-out league matches, All-Ireland qualifiers and All-Ireland hurling preliminary quarter-finals.

After a year of these arrangements, it was decided on review that they could be tweaked. The shoot-outs as practised last year were felt to lack excitement and atmosphere. In hurling, the fact that the crowd often had to wait to see did the umpire signal the point, was seen as adding to the underwhelming impact of the tie-breaker.

It was also brought up that in venues without Hawk-Eye, there would be inordinate pressure on umpires to get right decisions, which would determine a county’s progress in the All-Ireland championship.

That approach has been adopted in Connacht and Leinster in the past two weeks. After Mayo had defeated Leitrim the Sunday before last, provincial secretary John Prenty explained that the lack of floodlights in certain venues persuaded the council to have a shoot-out immediately after the 70 minutes had elapsed.

Leinster were quick into the arena with winner on the day protocols. Last year both the pre-season hurling and football competitions had matches decided by shoot-out. Wexford beat Kilkenny 3-2 to win the Walsh Cup final and Meath defeated Longford in the O’Byrne Cup semi-finals by 2-1.

In the latter match, poor light led to the abandonment of the second tranche of extra time, two five-minute halves, when the sides were still level.

Provincial secretary Michael Reynolds says that Leinster began at that point to talk about ways of improving the winner on the day arrangements. He points out that the first instance of the penalties this season was actually one of the province’s hurling competitions, the Kehoe Cup semi-final in December, won 2-0 by Meath, in December.

He also explained the thinking of going straight to penalties after 70 minutes rather than play extra time, which is the same procedure as Connacht applied.

“We discussed it,” says Reynolds, “and the feeling was that at this time of the year players haven’t yet attained full fitness and pitches aren’t always in the best condition. There was also the comfort of spectators given the cold weather.”

Momentum behind the plans to reduce the number of replays has increased with the focus on sorting out the club fixtures crisis, as nothing creates greater chaos for county schedules than inter-county replays suddenly materialising.

“The whole question of addressing the problems of club fixtures requires certainty and that means on-the-day finishes in as many matches as possible,” says Reynolds.

“It’s been a big improvement on the club front. In 2018 for the first time we provided for club championship matches to be decided on the day. Take Portlaoise as an example. They were in the senior football and intermediate hurling. With winner-on-the-day taking effect one didn’t get in the way of the other.”

It is also felt that the second phase of extra time, requiring teams to play for two five-minute halves is unsatisfactory, bringing the additional period up to nearly 50 per cent of the normal playing time.

That however is a matter for the rule book, as it is part of Rule 3.6, Official Guide part II and unlike the shoot-out procedures which are expressly a matter for Central Council, will require a motion to February’s annual congress. This will be proposed by Central Council.