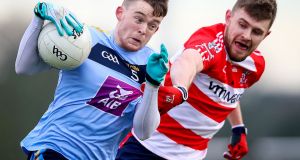 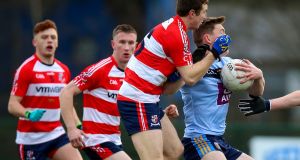 UCD cruised to a 13 point victory over CIT in the opening round of the Sigerson Cup.

CIT dominated the opening half, though two goals before the break courtesy of Conor Hartley and Conor McCarthy kept UCD in contention.

CIT had built up a seven point advantage before Hartley’s opening goal as the Cork college were in complete control, but the game turned on it’s head completely in the period before half-time.

CIT midfielder Paul Walsh was shown a second yellow card for a foul on Con O’Callaghan and CIT did not score from this stage onwards.

UCD took charge of the game and, although they did trail by 0-10 to 2-2 at the interval, John Divilly’s side were always going to advance with the talent on display and when playing with an extra man.

A long ball in from Barry McGinn was not dealt with adequately by the CIT goalkeeper and Evan O’Carroll tapped in from close range to give his side a 3-6 to 0-10 advantage at a crucial stage.

Fiachra Clifford added UCD’s fourth goal when the Kerry native palmed to the net from close range after being set up by Conor McCarthy.

O’Callaghan found the net for a goal of his own after a great run from the same player. O’Callaghan was lively throughout the game and it was always going to be an uphill battle for CIT to try and contain a player of his quality.

The 13 point margin may be slightly harsh on CIT who were strong for large periods, but goals win games and UCD’s five goals saw them through to round three.

Garda College overcame IT Sligo in the other game of the day to advance to the third round and both IT Sligo and CIT will get another chance in round two.