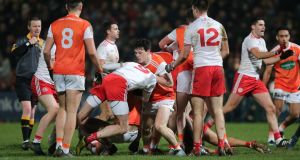 Tyrone and Armagh players during the McKenna Cup final at the Athletic Grounds. Photograph: Philip McGowan/Inpho

An explosive Dr McKenna Cup final at the Athletic Grounds rekindled memories of the intense rivalry which marred meetings between Armagh and Tyrone in the past.

That Tyrone won in the end was due to their greater slice of experience, their ability to turn defence into attack at lightning speed in the closing stages and an endemic spirit which helped them close out the contest.

James Morgan and Aaron McKay were the Armagh players dismissed by referee Joe McQuillan while Ronan McNamee was the Tyrone player to suffer expulsion.

Darren McCurry’s nine-point haul earned him the man of the match accolade while Niall Sludden and Cathal McShane shared four points as Tyrone squeezed home to reclaim the trophy they surrendered to Donegal last year.

Armagh’s inability to maintain their early surge during which they whipped over five points - three coming from Niall Grimley and one each from Rory Grugan and Stefan Campbell - allowed Tyrone to find their feet in the second quarter.

It was a measure of the visitors’ dominance at this juncture that they hit five unanswered points between the 20th and 32nd minutes as Armagh were pegged back inside their own half.

McCurry hit one of those points to complement his own early brace and two more points before half-time while Sludden (2) and McShane were also on target in helping the Red Hands assemble their 0-9 to 0-6 interval lead.

In a tempestuous second-half, Armagh remained on their opponents’ shoulder for the most part but the loss of Morgan to a red card before McKay made a similar exit was to weaken Armagh’s defensive structure.

Nor was their cause helped when Grugan was only able to manage a point from a penalty at a delicate stage of the match at which a goal could have triggered an inspired finish from his men.

Instead, the accurate McCurry, aided by McShane, was able to pilfer the points that took his side to a victory that elicited every ounce of commitment from their bodies.