UUJ and Maynooth both start Sigerson Cup with wins 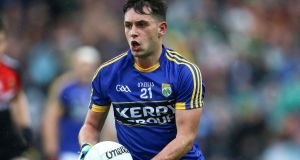 Kerry’s Jack Savage was in fine scoring form for IT Tralee on Sunday. Photograph: Gary Carr/Inpho

Ulster University (UUJ) overcame IT Tralee on a scoreline of 1-13 to 1-8 in their opening game of the 2019 Electric Ireland Sigerson Cup, played out in John Mitchell’s GAA club in Kerry.

IT Tralee played with the wind in the opening half and held a 0-7 to 0-4 lead at the interval.

Jack Savage opened the scoring with an early point and the Kerry college raced into a 0-5 to 0-1 advantage.

Ulster University reduced the gap to two points in the later stages of the opening half but a further score from Savage gave his side a three point lead at the interval.

Both sides had players sent off after half time, with Ulster University’s Gareth McKinless dismissed after picking up a second yellow card and Greg Horan sent off for IT Tralee.

Ulster University registered 1-6 in succession after Horan was dismissed to turn a three point deficit into a six point advantage.

IT Tralee responded with 1-1 to reduce the gap to two points but Ulster University held out and three late scores ensured the Northern college advanced to round three of the competition.

Maynooth University claimed a one point victory over Queen’s University in the competition’s second game on Sunday, with The Dub in Belfast playing host to the match.

Maynooth University raced into a 0-2 to 0-0 lead with points coming from Padraig Fogarty and Niall O’Sullivan but Queen’s University responded well and the Kildare college held a slender 0-5 to 0-4 lead at the break.

Maynooth University registered two crucial scores after half time to open up a three point gap, which they would never relinquish and two late scores from Ryan Treanor and Niall Keenan were to no avail as the visitors held on for a 0-9 to 0-8 victory.