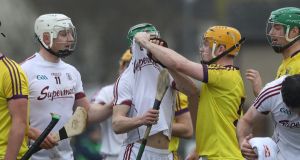 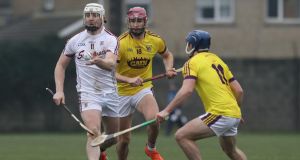 Former Hurler of the Year Joe Canning gave a masterclass as Galway were crowned Walsh Cup champions with this win over Wexford at Bellefield in Enniscorthy.

Before they begin another campaign in Division 1B of the National Hurling League against Laois next weekend, Micheál Donoghue’s side saw off their Leinster rivals.

It was a sensational ending to a poor first half. Aidan Harte had just found the net for Galway when three players were sent off before the break. Galway’s Padraic Mannion and Jarlath Mannion were sent to the line while Wexford’s Liam Ryan was also sent off.

The visitors were 1-8 to 0-9 in front and Canning took complete control in the final quarter with Cathal Dunbar also seeing red at the end.

Ian Byrne gave Wexford the lead inside the opening minute and Matthew O’Hanlon doubled up on that. But Canning scored his first free after five minutes.

Canning and Byrne finished the half with five points each but Galway took a 1-8 to 0-9 advantage into half-time. Harte found the net after Canning and Jack Coyne combined in the 28th minute.

But there was drama in injury-time, Padraic Mannion and Ryan got straight reds when they were involved in an off-the-ball incident. And 40 minutes into his debut Jarlath Mannion got red when Shane Reck’s helmet finished up on the ground.

Galway still held the lead and a fast start to the second half meant they were 1-13 to 0-10 in front by the 42nd minute. Wexford closed the gap at times but Galway held them at bay with Canning instrumental.

Harte was brilliant in defence while Aidan Nolan and Séamus Casey saw their goal-bound efforts stopped by Fergal Flannery. Then Fanning missed a penalty before Dunbar departed on a second yellow in a frantic finish.