Ryan Wylie and Monaghan ready to come back for more 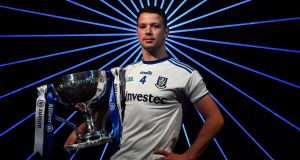 Crunch the numbers on Monaghan’s 2018 Championship campaign and you come up with some intriguing scoring returns.

Players recognised as defenders – we include goalkeeper Rory Beggan in this category – scored 4-47 in total for them, compared to a relatively meagre 4-89 from forwards.

Take Conor McManus, their All-Star and prolific forward out of the mix, and that return from Monaghan’s forwards drops right down to 2-42.

The irony is that while Karl O’Connell, who hit 1-7 for Monaghan from wing-back, won an All-Star, and defenders Fintan Kelly and Vinny Corey were regular scorers, Ryan Wylie may be their best back in the traditional sense.

“I didn’t realise that to be honest,” said Wylie of Monaghan’s scoring haul from defenders.

“We’re just told to go out and play. We’re old enough now and also we’re on the county team for a reason; we have to be able to make decisions on the field ourselves.

“If you feel you’re going to benefit the attack by going forward, and that you can get a score, then go on ahead. That’s maybe the way the game has gone in general. If you look at the other teams, they maybe have similar stats as well.”

Wylie has a point.

Jack McCaffrey, a half-back, is the Footballer of the Year after all and hit vital points in their two championship games against Tyrone. Attacking defenders are football’s go-getters these days, the ones with the licence to thrill as scoring forwards are typically bottled up by blanket defences.

The other reason why Monaghan’s defenders score so much is perhaps because they simply have to with commentators consistently labelling them a one-forward outfit that’s entirely reliant on McManus up front.

Speaking at the launch of the Allianz Football League, which begins for Monaghan against Dublin on Sunday week in Clones, Wylie rubbished that idea.

“Obviously ‘Mansy’ is unbelievable, some of his point-taking and some of the scores he’s gathering up are just unbelievable,” said Wylie.

“So we might as well use him. Everyone is saying, ‘he’s carrying the team’ or whatever, but I’d say if any other county had him in their forwards, he’d still be racking up the same scores.

“Barcelona have Messi and all these sorts of players, that’s just the way, teams are always going to have their star forwards. I think last year especially the whole team was nearly chipping in, it wasn’t just Conor. Conor McCarthy had a very good season, scored a few good scores. It’s a team effort now, everybody has to try to chip in and get us over the line.”

Some commentators expressed surprise that Wylie’s own form wasn’t rewarded with an All-Star as Monaghan came up just short of an All-Ireland final place. The man himself, a 24-year-old Dublin-based radiographer, wasn’t overly surprised.

“I actually didn’t think I was going to get one anyway,” he said.

“I wasn’t too bothered, there were plenty of other players I’d say that probably deserved it more than me. I’d say they were more pissed off. I thought Drew [his brother] might have got one ahead of me so I wasn’t too worried.”

It remains to be seen how long Monaghan, one of the smallest counties in Ireland with a population of around 60,000, can keep mixing in this sort of company, winning All-Stars, threatening to reach All-Ireland finals and holding their own in Division One.

“A couple of years ago Longford beat us in the qualifiers and that was a low day for Monaghan football,” said Wylie.

“We were being slated in all sorts of media outlets, that this was it for Monaghan football, boys were going to retire and nobody could see us coming back.

“But we’ve always seemed to come back and be competitive. Within the league and the championship, we’ve always taken a few scalps each year. There’s still a couple of lads coming through too. I’m only 24 myself so I’d hope there’s lots more good years left.”