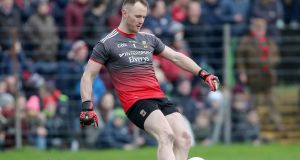 Rob Hennelly is back in the Mayo team. Photograph: Inpho

Robert Hennelly has been named in goal for Mayo’s final Super 8s clash with Donegal on Saturday evening.

Hennelly replaces the injured David Clarke for his first start since the Connacht semi-final defeat to Roscommon. The Breaffy clubman had an excellent league campaign as Mayo claimed the Division 1 title in March.

Midfielder Tom Parsons is also reported to be in the matchday 26 for the first time in over a year after his knee reconstruction.

Meanwhile Dublin and Tyrone have both named weakened teams for their clash in Omagh on Sunday. Both teams have already qualified for the All-Ireland semi-finals. Tyrone have made 15 changes while Dublin have made eight.

The reigning champions look to be resting Ciaran Kilkenny, Paul Mannion and Jack McCaffrey but have still named a strong XV. Rory O’Carroll is in line to make his first start since the The Irish Times revealed in March that he was returning to the capital from his lengthy sojourn in New Zealand.

Diarmuid Connolly is named in the 26, and also expected to make his return to action.