Sideline Cut: The worst fears of the anti-Sky lobby will come to pass in Castlebar 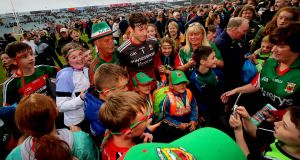 David Clarke celebrates after Mayo’s victory over Galway in round four of the football qualifiers at the LIT Gaelic Grounds in Limerick. Photograph: Ryan Byrne/Inpho

‘Once again . . . welcome to my house. Come freely. Go safely; and leave something of the happiness that you bring.’ – Dracula, Bram Stoker.

One of the reasons that hundreds of thousands of people will tune into events in Castlebar at tea-time on a lazy August Bank Holiday Saturday is that they wish to see the conclusion or continuation of one of the great mysteries of sport. How do you kill a team that doesn’t know how to die?

It is only slowly dawning on the nation that RTÉ, the national broadcaster, will not be showing Donegal-Mayo live; that the rights belong to Sky. Here, then, are the worst fears of the anti-Sky lobby come to pass: the biggest west of Ireland football summer game in many years between two gargantuan Gaelic football counties and RTÉ doesn’t have it.

Here, then, is the moment of reckoning for the archetypal bachelor on a lonesome hill in deepest Belmullet or the fringes of Gortahork. He’s just in from the fields, sheep dog at his feet and he plans on catching the headlines of the RTÉ news before switching to “the other side” for the big match so he can give out to himself about Spillane and Brolly.

This man is not, of course, a Sky subscriber and the local tavern in his remote hamlet is miles away. What is he supposed to do here? He is one of thousands across Ireland abandoned by the GAA.

Clearly, he is left with no choice but to either sit huddled by his wireless to listen to the broadcast on Ocean or Midwest or, perhaps, as a last resort, to crank up the Apple Mac laptop and illegally stream the entire broadcast while he lays waste to the bourbon and sour mix he picked up in M&S and which reminds him of his wilder summers along America’s west coast in the 1970s. Either way, he is going to be giving out about the bloody licence fee for the rest of the weekend- and the Association has let him down.

Some things should be free to air and whatever happens in Castlebar on Saturday night is one of them. On one level, this is a championship football match with a level of winner-takes-all drama and tears not witnessed on any television station since Agnetha came to a very public realisation that herself and Bjorn were on the rocks.

But on another level, it’s about a county team going beyond all reasonable limits of endurance. It’s about spirit.

The match, they say, has been a sell-out for days – and possibly for years. Everything about Mayo’s fatalistic and riveting championship summers seem to have been leading to this evening: the final stand of all they are.

The world is convinced that Mayo’s best chance has already come and gone. They have not managed to raise their game sufficiently to win a Connacht title for four hot summers. And over those long summers, they have aged in dog years.

The All-Ireland defeats have begun to blur into one big mesmerising collage of insane twists, tragi-comic bad luck and ingeniously wicked new ways in which to inflict old torture on a football county that, really hasn’t been asking for too much.

There was a poignant dimension to Mayo’s league final win in Croke Park in the spring for two reasons. Firstly, the day was proof that there is no divine law against Mayo winning a national final in Croke Park. And it was uplifting to see the old war horses on the field celebrating and lifting silverware; it was a tantalising glimpse of what the otherworld of an All-Ireland championship might look like.

But you couldn’t help but wonder, too, if the moment would be as close as this generation of Mayo footballers would come to experiencing joy on the big pitch. Many of Mayo’s big players were involved in the All-Ireland loss to Donegal in 2012 when this current saga began. They have lost finals in 2013, 2016 and 2017 since then. It’s not really about what the physical toll of those campaigns do to the body. It’s what they do the soul.

By rights, they should be broken by now. But what a tale they are. In this era of brisk and unsentimental Dublin excellence, whose acquisition of All-Ireland titles seems almost unavoidable, Mayo’s quest stands as quixotic. What they want is not unreasonable: just one All-Ireland championship year in six decades of trying. They are hardly asking for the moon.

Over the last few years, the country has followed Mayo, supported Mayo, felt for Mayo and then, slowly but surely, the public took stock and said: nah. It’s gone from them. Their day is done. It’s a shame. Their limitations as a football team have been held up under a spotlight September after September.

Individually, their players have been called into question in ways that simply wouldn’t happen to Dublin or Kerry players. Since being ransacked by Roscommon in MacHale Park in early summer – the first time that event happened since Pee Flynn was an ambitious newcomer on the political scene – Mayo have been depicted as simply hanging on.

Sooner or later, some team or other would put them out of their misery and that would be that. Meantime, they went and beat Down. They were down and out for long stretches against Armagh. But they won anyhow. They were supposed to accept their fate against Galway. They won. They were put to the sword by Kerry down in Killarney. They shrugged and moved on. They were hanging on by a thread for a full hour against Meath in Croke Park until, all of a sudden, they were rampant, fizzing with life and intent and ambition. They won. They have been written off all summer but then, when they were ever truly written on?

And now they are 70 minutes away from a crossing point. If they lose in Castlebar against an exciting young Donegal team, then we will be watching the last rites of a terrific football team who didn’t understand that there are supposed to be limits to the human capacity; that you can’t forever absorb the hurt, drink the disappointment and come back stronger. If they lose, goes the conventional wisdom, then that resolve and mad, mad stubbornness will surely crumble.

Little wonder that Donegal supporters are anxious about this. They’ve been a joy to watch but they can’t but feel that they are entering not so much a football ground on Saturday evening as a dark forest to meet a force for whom the normal limitations do not apply. If Mayo are to be silenced, it will take something monumental from their guests. But if Mayo are still standing at the end of it all, then they will stand as something strange and frightening.