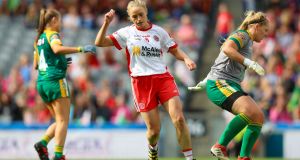 Neamh Woods returns to the Tyrone side for the All-Ireland quarter-final against Cork in Ballinasloe on Saturday. Photograph: Tommy Dickson/Inpho

Cork boss Ephie Fitzgerald has reacted to last weekend’s shock loss to Armagh by making five changes in personnel for this quarter-final clash with Tyrone. The Red Hands are boosted, meanwhile, by the return of skipper Neamh Woods from World Cup duty with the Northern Ireland netball squad.

There should be a reaction from Cork following the Armagh slump, and the memories of the seismic 2010 All-Ireland quarter-final defeat against Tyrone should also serve to focus Rebel minds.

But Tyrone are here very much on merit, having seen off Donegal in the group stages, while also running table-toppers Mayo to three points.

Tyrone have adapted very well to life back in the senior ranks, following their 2018 All-Ireland Intermediate win.

This is very much bonus territory for Gerry Moane and his side, who will look to expose any chinks in the Cork armour.

Cork will have one eye on a potential semi-final with Dublin at Croke Park on August 25th, but they have work to do before that becomes a reality.

Dublin stuttered against Westmeath in the Leinster final before finally coming good to claim an eighth straight provincial title.

The Sky Blues, going for a third successive All-Ireland title, appear to have blown off the cobwebs with big victories over Waterford and Monaghan since then in the group stages of the All-Ireland series, but there may still be a fear that they haven’t been fully tested.

Kerry’s passage to the last eight of the All-Ireland series has been far from straightforward.

They didn’t make the Munster final but showed improved form to run Galway to four points, before claiming a gritty two-point victory against Westmeath in front of a big Killarney crowd last Sunday to make it through.

Kerry know that they need a huge step-up in performance to match Dublin, who have beaten them in the 2018 quarter-final and in the semi-final two years ago.

Both sides are an hour away from a semi-final slot at Croke Park on August 25th, where they’ll meet the winners of the Cork-Tyrone quarter-final.

Bord na Móna Park in Tullamore will provide the fitting backdrop to what should be a fiercely-contested tie.