Super 8s previews: Donegal look to have too much game for Mayo

Kerry, Dublin and Cork look poised for success in final round of games 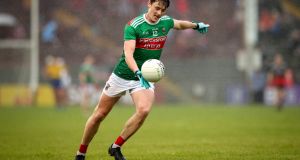 Diarmuid O’Connor is back in contention for Mayo as they take on Donegal in Saturday’s crucial Super 8s clash in Castlebar. Photograph: Ryan Byrne/Inpho 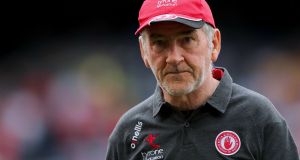 Mayo v Donegal, MacHale Park, Castlebar, 6.0 (live on Sky Sport Arena)
On the one hand there is no available data to support the idea that Mayo can turn the season’s form on its head and leap-frog the Ulster champions into next week’s All-Ireland semi-finals; on the other – as the Kilkenny hurlers demonstrated last week – games are played on grass and not on print-outs.

Running in the home side’s favour is the incremental strengthening of the team with Patrick Durcan, Keith Higgins, Matthew Ruane and Diarmuid O’Connor back in contention after injury but getting players, however good, up to match speed – especially a match like this – is easier said than done.

Donegal aren’t untouched by this either and local confidence is strained hoping that Patrick McBrearty and centrefielder Jason McGee are alright to make the cut although there is more certainty about the return of Neil McGee and Paddy McGrath.

It is reported by the Connaught Telegraph that James Horan will make a change at goalkeeper, bringing in Rob Hennelly for the injured David Clarke. Ironically, given the latter’s well attested problems with restarts, his replacement didn’t have the best of days on the kick-outs the last time he started, also in Castlebar in the defeat by Roscommon.

Neither have the artillery that Shaun Patton brings to the job for Donegal.

Running a form line through Kerry – although both similarly blitzed Meath in the final quarter – it’s hard to see Donegal not winning. Their quick, young players acquitted themselves well, apart from Jamie Brennan, who was well chaperoned by Tom O’Sullivan and the leadership of Michael Murphy shone like a beacon.

Maybe Mayo’s experience and muscle memory can pull down one last big performance but from what we’ve seen Donegal are too fast and productive.

Meath v Kerry, Páirc Tailteann, Navan, 6.0 (live on Sky Sports Action)
At the start of the quarter-final campaign this looked like an outstanding opportunity for Meath to butt heads with a top county and if, unfortunately from their perspective, Andy McEntee’s side are fulfilling a dead rubber, Kerry have a more urgent perspective and need something from this to guarantee progress to the semi-finals.

They put in an excellent shift against Donegal and will be strengthened here if as published, David Moran (right) returns to the team, as his ball winning exploits in the first match illustrated what was missing the last day.

Meath have had a creditable quarter-final series so far, certainly more so than is indicated by two nine-point defeats when they ran out of steam in the endgame of both matches.

Injury isn’t helping with the knock Mickey Newman got against Mayo considered likely to keep him out of contention this weekend, depriving the attack of much needed composure.

On one level this is an irrelevance for Meath but with a season in Division One on the horizon, it would be foolish not to use this to take a level on the team. The high-performing defence will have its greatest test against Kerry forwards, ranging from the pace and dynamism of Stephen O’Brien through the class of David Clifford and the recovering form of Paul Geaney.

Greater attention to detail up front – better shot selection or, just better shots – would enable Meath to set up an early contest but in the end, Kerry know that a reasonable return form their own forwards will guarantee top spot.

SUNDAY
Tyrone v Dublin, Healy Park, Omagh, 4.0 (Live on RTÉ 2)
The revised sequencing of rounds this year has hit the fixture, which 12 months ago, was a virtual playoff for the semi-finals but is now a contest around which debate rages as to whether the teams should take it seriously. There is actual practical merit in the suggestion because with a six-day turnaround for the winners and no strong feelings about prospective opponents, coming second would not be a huge issue.

That is however more a description of consequence than motivation. There’s an almost devotional element to the idea that the more you lose to Dublin, the closer you are to beating them and it also should be said that throwing matches hasn’t been prominent in Mickey Harte’s 17-year manual on contesting championships. The corresponding match 12 months ago was Dublin’s tightest of the championship – in a couple of respects, given the narrowing of the Healy Park pitch – but they coped fairly well until late carelessness turned the match into more of cliff-hanger than had been the case for about an hour.

Since then Tyrone have had the benefit of a deserved league win in Croke Park where the new attacking model was seen to great effect but it has been sporadically wheeled out since, most recently back at headquarters to prevent the Cork match turning into horror-show.

Dublin are considered likely to rest some front-liners – presumably on the grounds that one way or the other, this would solve the turnaround problem. It would also give an opportunity to get game time into the legs of panellists, who may be needed in the final, two-match push for the famous five.

Cork v Roscommon, Páirc Uí Rinn, Cork, 4.0 (Live on RTÉ News Now)
The back markers in the group have had contrasting campaigns. For Roscommon, the outcome so far has been pretty much as last year, bearing in mind that a win here would be a step up but overall, it’s another Super 8s that ended for them a match early.

What’s disappointing is that they came into the quarter-finals as Connacht champions after beating both Mayo and Galway and appeared to be building on last year’s experience.

Cork have been a different kettle of fish. After five years of drifting, apparently irretrievably, away from the top level of the game Ronan McCarthy’s team posted a number of decent performances against three of the likely All-Ireland semi-finalists, Kerry, Dublin and Tyrone.

Injuries have dented their potential this weekend with the impressive Liam O’Donovan out and the outstanding Brian Hurley side-lined. Even Seán Powter who came back in the last match, isn’t selected this week because of his troublesome hamstring.

Roscommon are well capable of winning this given that Cork aren’t at full strength. They too, albeit at home, were competitive against Tyrone and battled the odds against Dublin, despite losing Conor Daly to indiscipline, without quite impressing as much as the weekend’s opponents.

Conor Cox also returned to form after the disappointment of the Tyrone match but Cork have just been more buoyant and can round off on a positive note.