Never mind round robins. The most crucial match in the last round will be winner-takes-all 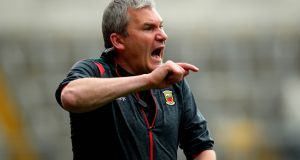 James Horan: will be in a position to field a selection closer to full strength than at any stage since losing the Connacht semi-final when Mayo host Donegal in Castlebar. Photograph: Ryan Byrne/Inpho

This weekend will clear the decks for the All-Ireland semi-finals. Two matches left to win Sam Maguire. That may well train attention on Dublin’s bid for an historic five-in-a-row but immediate focus falls on the team that has famously yet to win the title.

Mayo make what many believe will be the team’s last stand in this year’s championship at Elvery’s MacHale Park where Ulster champions Donegal will be the visitors this Saturday evening.

It may be the Super 8s but in the last round of the quarter-final round robin, this will be for keeps. Mayo must win to progress to an eighth semi-final in nine championships – after last year’s sabbatical.

Already the melodrama is building. James Horan has to change goalkeeper with news that David Clarke got injured at training this week – a misfortune that saves the Mayo manager having to choose between Clarke, whose kick-outs have been under scrutiny, and Rob Hennelly, who lost his place after the Connacht semi-final defeat by Roscommon.

All of which will draw a wry smile from Stephen Rochford who made exactly the same call, albeit without the compulsion of injury, before the All-Ireland final replay against Dublin in 2016 and can also give witness evidence that such things can go wrong.

Now coach in the backroom team of Donegal manager Declan Bonner, Rochford returns to Castlebar this weekend like Coriolanus, marching on the home county which drove him out only 12 months ago.

It’s one of the subplots in the last weekend of Super 8s’ action, which will confirm in what order Dublin and Tyrone, who meet in Omagh this Sunday, qualify from Group Two and who, of Kerry, Donegal and Mayo, will join them.

It was Donegal who initiated this generation of Mayo players’ heartache in All-Ireland finals by beating them in the 2012 final. Since then however the counties have played seven times in league and championship and Mayo have lost only once.

They also have a panel of burgeoning health and fitness after a litany of ill-timed injuries and manager James Horan will be in a position to field a selection closer to full strength than at any stage since losing the Connacht semi-final.

Of concern is the air of irony that attends the concept of ‘Fortress Castlebar’ where Mayo have been eliminated from Connacht in three of the last four championships.

Against that, Donegal will uncomfortably remember that 12 months ago they had a home fixture against Tyrone in a similar winner-takes-all scenario but fell flat in their attempt to make the All-Ireland semi-finals.

This time around, they look a far tougher proposition and only two weeks ago went toe-to-toe with the Kerry team that fleeced Mayo in Killarney on the first weekend of the quarter-finals. Bonner has injury concerns, chiefly about Patrick McBrearty, one of the team’s clutch of top-class forwards.

In the same group Meath are hosting Kerry, hoping not to wrap up their first Super 8s’ season with nul points but reality is likely to trump any optimism.

The main decisions in Group Two have been made. As last year Dublin and Tyrone, All-Ireland champions and finalists, are in the last four but sign off on Sunday afternoon with first place in the table at stake.

It’s just a few days shy of five years since Jim Gavin’s team lost a championship match – five of the starters in the last match against Roscommon haven’t lost one at all – and they are unlikely to want to experience defeat just three rounds short of potentially making history.

It is of course the only match left that the champions can afford to lose and some changes are expected to rest players – the winners will play in the first All-Ireland semi-final six days later, as Dublin did last year – and play anyone that Gavin might be thinking of using in what remains of the season.

It’s probably fair to speculate that if returned prodigal Diarmuid Connolly doesn’t get a run in Healy Park, he’s unlikely to appear thereafter. The venue does have some happy memories for the player, as one of his occasional wonder scores, back in the dying seconds of the last regulation match of the 2014 league season, secured a play-off spot for Dublin.