Mayo - players and supporters - rage against the dying of the light

There was a time to plant and a time to harvest. Will Castlebar signal the end of the long running Green and Red season? 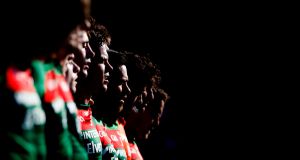 Despite crucifying defeats and outlandish ill-luck and decision making, the Green and Red have been ignoring the writers and naysayers, prophesying their demise since 2014.

Football won’t end this Mayo team. Physiology will. That and old age. The 2011 All Ireland semi-finals heralded a new age in football. Jim McGuinness changed the game as we knew it. Dublin broke the 1995 mould and Kerry blew a final that they never really recovered from.

Mayo were in that mix. Dublin with six, Donegal and Kerry one apiece were to hoover up all the All-Ireland titles since. Mayo were the constant outlier. In successive years they knocked out Cork, Dublin, Donegal, the previous year’s All-Ireland champions. Also a sequence was in place: to win the All-Ireland you had to take out Mayo in the final or semi-final. That pattern lasted up to 2017.

The Dublin team from 2011 have lost eight of the starting 15, of the six forwards only Bernard Brogan - and recently the returned Diarmuid Connolly - even panellists. The entire Kerry team is gone; indeed, only four remain from their 2014 vintage. Four of the 2011 Donegal team remain. Eleven of the losing semi-final starters and subs are still in the current Mayo squad. Cut that year from the 2011 squad was Tom Parsons, who if fit would also be available for selection this weekend.

Looking at the current Mayo team we can break it into three sections. The rump, the oldies from 2001, ‘04, ‘05, ‘06 and ‘09 onwards. Two groups, one added since 2014 in the personae of Diarmuid O’Connor, Paddy Durkin, Brendan Harrison the main stickers, allied to the second group tentatively hoping to bloom which includes Eoin O’Donoghue, Steven Coen, Stephen Drake, Fionn McDonagh, Matthew Ruane and for fleeting moments the likes of Ciarán Treacy and James Carr.

When the rump detaches itself from the core, it will bring the rest down with it. Unlike Dublin, Donegal and Kerry, Mayo choose not to replenish to the same degree.

In Donegal one McHugh was replaced with another seamlessly. In Dublin one of the greatest footballers ever chose a gap year of sorts before re-emerging as a summer twist. Diarmuid Connolly’s loss was an opportunity for the Scully’s and O Callaghan’s of the camp. Mayo have been trying to integrate the likes of Evan Reagan into the team since 2012 and failing.

James Horan MK1 freshened a tired squad. In the shake-up, out went the likes of Parsons, who would miss Mayo’s subsequent next two All-Ireland finals. A shape and pattern merged, fine tuned by the coaching skills of Cian O’Neill and in particular, Donie Buckley.

Four finals prove that a lot of the boxes were ticked. Horan MK2 will be defined by the next match. Winning an improbable league title suggested that the sight of silver could actually lead to a bigger pot. The arrival of four useful prospects, three in the troublesome forward line even fooled old skeptics like me.

Something happened though. One of those Mayo mirages hit the camp. A glut of wides against New York was explained away as blowing dirty oil clear. Roscommon, though, landed the punch that brought Mayo back to a hard earth. And since then injury, mileage and a lack of belief in the kids has knocked Mayo off the rails.

Although the return of Diarmuid O’Connor is welcome, his absence on current form did not prove fatal. Like his brother, the captaincy robbed something from his soul. The loss of Ruane was a real blow and that’s where the injury to the second O’Connor shook the Mayo faithful.

With the replacement around the middle depending on the return of Séamus O’Shea, Donie Vaughan or a miracle in Parsons, it’s plain that Mayo didn’t plant enough saplings when they should have.

It would be churlish, though, not to admire a pluck and guts not always accorded to Mayo teams. Despite crucifying defeats and outlandish ill-luck and decision making, the Green and Red have been ignoring the writers and naysayers, prophesying their demise since 2014.

Refusing to submit until, as I said at the outset, age and injury force the knee to the ground. Donegal may or may not be that crucible. The delicious irony of last year’s Mayo manager Stephen Rochford, who did the county some service, now in Donegal favours coming back to his home county against his own, may yet provoke one final slash from the sword, one last great bucket from the well before it runs dry.

This era reminds me of Leeds United 1965-75: flaky keepers, bad luck, blowing finals and league titles for fun but just when everyone wrote them off they went and ran away with the 1974 League title, going the first 28 matches undefeated and leading Stoke 2-0 before losing 3-2 to end that great run.

Such was the effort and energy expended that was Leeds’s high water mark. The slide came and the older players had remained too long. United were damned. Here’s hoping Mayo aren’t.

* John Cuffe is a life-long Mayo supporter and author of ‘Inside the Monkey House - My time as an Irish prison officer,’ published by Collins Press.