O’Callaghan aiming to finish on a high note with Mourneabbey 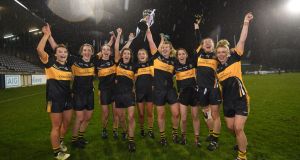 Fourteen years ago, Síle O’Callaghan was one of the ground breakers for Mourneabbey as they won their first All-Ireland club title at junior level.

Two years later they were intermediate champions and in the next few weeks they aim to be senior All-Ireland champions for the second year in a row.

At the age of 34, O’Callaghan is the most senior member of Shane Ronayne’s champion squad. But despite all their recent success there is still one loose end to tie up this weekend.

Two of the lowest points of O’Callaghan’s footballing life came against Donaghmoyne, with the 2015 loss in the All-Ireland final and the following year’s heartbreaking defeat to the Monaghan superpower in the semi-final.

On Sunday Mourneabbey get their chance to avenge those losses when they host the Ulster champions at Clyda Rovers GAA club (1pm).

“Disappointment is what I associate with playing Donaghmoye. We have had a few tough losses, and they are an excellent team,” said O’Callaghan, who will line out alongside her younger sister Maire again this weekend.

“I wouldn’t say that we necessarily left anything behind in either of those games. Some games you come away and ask ‘did we show up?’. We have to say they were excellent in those games.

“It’s been a few years since we played so hopefully we might have grown up. Hopefully we’ll have the edge at the weekend but it’s hard to know, not having played them in a few years.”

Victory over Waterford’s record breakers Ballymacarbry in the Munster final sealed Mourneabbey’s progress to the last four in Ireland, the sixth time in a row they have reached this stage.

It’s the third time in succession that they defeated Ballymac in the final, and Mourneabbey players leave huge value on victories over their provincial rivals. Some priceless lessons have been learned from those encounters.

“Jeez, they are a tough team. I think they are quite similar to us in that they are a very tight knit group. We’d have a lot of people who all came up together and they have the same, you can feel that off them. They are very tight and they’d die for each other. We’d similarly do it.

“When they got the fourth goal and were up three points it was pretty nerve-racking alright. I suppose we have had our fair share of losses and we have been able to pull calm heads out of somewhere and knuckle down and not lose it.

“In our first few years if we found ourselves in that position that close to the final whistle I’m not sure if we’d manage to maintain the cool heads.”

O’Callaghan will tog out for Mourneabbey on Sunday with the knowledge that defeat will mean her playing career is over.

In 2017 a ruptured Achilles tendon sidelined her for a year but getting back in time to come on as a sub in last year’s final brought an immense sense of achievement. But the dream of ending her stint on her terms is what has driven her back into the starting team this season.

“It is special this year. 2017 was a pretty abrupt end but I managed to get back training around August time last year which was fantastic. When the injury happened initially I hadn’t intended playing again, I felt that was that.

“I am being very clichéd, but I wanted to end on my own terms. I wanted to decide myself to stop playing rather than have an injury decide for me. Last year was just a little bit too short only coming back in August it was over before I knew it.

“I’m giving it one last year this year. I am getting married on December 20th this year too so I think this is a good way to keep me fit for the wedding.”

The class of 2005 has been reduced to seven survivors following Cathy Ann Stack’s and Ciara Harrington’s departures after the the ultimate senior success last year.

As well as O’Callaghan, Ciara O’Sullivan, Róisín O’Sullivan, Sandra Conroy, Rebecca Larkin, Catherine Coakley and Éimear Harrington are there since that ground-breaking day. Whatever happens, the surviving seven will be shorn of their leader by Christmas.

“We were so excited when we won the junior and we were actually then eligible to play senior league and championship in Cork. To think we have progressed on to win the senior club All-Ireland last year is just absolutely amazing. I couldn’t have imagined it to be honest.”