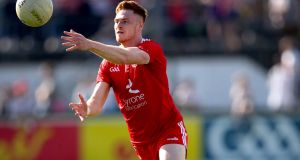 Tyrone’s Conor Meyler: “If you look at our Championship scores, we scored highly all year.” Photograph: Ryan Byrne/Inpho 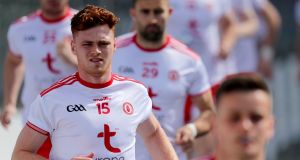 Conor Meyler: “I saw Dublin, Kerry and Mayo all do it where they drop all their players and people still talk about what a great open and expansive game it was.” Photograph: Oisin Keniry/Inpho

Back in March, Mickey Harte outlined a new, more direct attacking approach which he felt could elevate Tyrone to All-Ireland success this year.

“I suppose we are renowned for having nippy inside forwards that are good on their feet and are nice, accurate players,” said Harte. “Maybe we generally had too many of them. We need to mix and match a bit, add a bit more power and a bit more strength.”

Eight months on, Tyrone have a new All-Star full-forward in powerful edge-of-the-square man Cathal McShane, suggesting that while they didn’t win the All-Ireland, their new approach still paid off.

Some commentators claimed that Harte effectively reverted to defence-first, counter-attacking football after losing to Donegal in June, though Conor Meyler, McShane’s forward colleague, rejected this as a myth.

“I don’t think that we did revert back to type in the sense that if you look at our Championship scores, we scored highly all year and Cathal obviously was top scorer this year as well,” said Meyler. “You had a target there that was scoring freely and we were getting the ball into him quick and early.

“I think sometimes the public perception is that they tarnish us with this brush that says Tyrone are defensive and all it takes is just one or two people in the media to do that and people latch onto it as fact without backing it up with any real evidence from what’s actually going on in a particular game.

“I think we came out and played a lot of open football this year and some of our best assets are on the break. So why would you not use that? I watched the All-Ireland final and watched a lot of games this year where teams played 15 players behind the ball and nobody says anything about it, because people see what they want to see and sometimes hear what they want to hear.

“I saw Dublin, Kerry and Mayo all do it where they drop all their players and people still talk about what a great open and expansive game it was.”

The 25-year-old acknowledged that Tyrone did fail to get their tactics right against Donegal. “We realise how good a forward line we have and the need to get ball to them. We probably got caught by Donegal in the sense that it was our sole focus, we were trying to get the ball in too quick,” said Meyler.