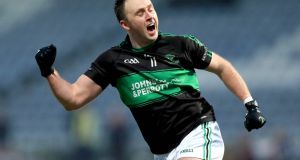 LEINSTER CLUB SFC FIRST ROUND
Ferbane (Offaly) v St Patricks (Wicklow), O’Connor Park, Tullamore, 1.30
Composure and a strong bench helped to get champions St Patrick’s over the line in a tight final tussle with Arklow Geraldines Ballymoney but this may be beyond them, as Ferbane have gained altitude impressively through the club’s first successful county campaign in 25 years and have the rising Cian Johnson in form and shooting the lights out. Verdict: Ferbane

Garrycastle (Westmeath) v Killoe Emmet Óg (Longford), TEG Cusack Park, Mullingar, 1.30
Garrycastle’s know-how in club championship combat was on display when they deposed St Loman’s despite an eight-point deficit at half-time and with every match potentially Dessie Dolan’s (above) last, they are driven and capable of getting past Emmet Óg, who are trying to emulate their predecessors, Mullinalaghta. Verdict: Garrycastle

Eire Óg (Carlow) v Castletown Liam Mellows (Wexford), Netwatch Cullen Park, 3.0
On their third successive crack at Leinster, former kingpins Éire Óg will hope for better luck and their number may have come up between experience and the discouraging stat that no Wexford football club has won a match in the provincial championship for 15 years. Verdict: Éire Óg

CLARE SFC FINAL REPLAY
Kilmurry-Ibrickane v St Joseph’s Miltown-Malbay, Cusack Park, 2.0
Every bit as hard-fought and attritional as expected with the neighbours clashing for the first time in a final that looked to have decisively tilted towards the favourites but KI responded to draw. Joseph’s likely not to slip up again this weekend. Verdict: St Joseph’s

CORK SFC FINAL Duhallow v Nemo Rangers, Páirc Uí Rinn, 4.0 [Live TG4]
It’s become a little sobering for Nemo over the last decade, as even formerly routine titles became hard to find. Last year’s progress to the All-Ireland final was welcome as a first in 10 years but they ended up getting spanked by the new aristocracy of Corofin. The indisputable rise of Cork football is an encouragement and Nemo have looked strong so far. Duhallow have some high-profile county names in Donncha O’Connor and Aidan Walsh as well as a couple of Keith Ricken’s All-Ireland winning under-20s. Nemo, however, looked efficient and ruthless in the big semi-final walloping of Douglas with veteran Paul Kerrigan and the more contemporary Luke Connolly of the county contingent showing well Verdict: Nemo

DONEGAL SFC FINAL REPLAY
Gaoth Dobhair v Naomh Conaill, MacCumhaill Park, Balybofey, 3.0
Last season’s Ulster champions were caught on the line by Naomh Conaill after a lack-lustre final and they must now plan without defenders Kieran Gillespie and his replacement last week Christopher McFadden, both injured. It will however serve to focus them and the challengers may end up regretting missed opportunities at death last week. Verdict: Gaoth Dobhair

LIMERICK SFC FINAL
Newcastlewest v Oola, LIT Gaelic Grounds, 3.0
Newcastlewest have been a strong presence this decade in county finals, winning four years ago, but Oola are a novelty arriving on the 40th anniversary of their last county title and 39 years after their last final. Their more practised opponents, though, look to have the edge. Verdict: Newcastlewest

MEATH SFC FINAL
Ratoath v Summerhill, Páirc Tailteann, 3.0
A final of contrasts, as the young, fast developing commuter-belt Ratoath go for a first county title against the more rural aristocrats of Summerhill, who are in a third successive final, making it six this decade, including a replay, their last title six years ago. Ratoath have a bigger selection of recognisable names in Conor McGill, Brian McMahon and the Wallaces but Summerhill may have the stronger collective and can repeat the narrow victory of earlier in the championship. Verdict: Summerhill

KILDARE SFC FINAL REPLAY Moorefield v Sarsfields, St Conleth’s Park, 2.0
Another of the drawn county football finals from a week ago, Moorefield got a bit lazy after early goals from Mark McDermott and Éanna O’Connor (left) apparently sent them  on their way to three-in-a-row but a determined Sarsfields caught them. The champions may not be as obliging this time. Verdict: Moorefield

KILKENNY SHC FINAL
Ballyhale Shamrocks v James Stephens, UC Nowlan Park, 3.0 [Deferred, TG4]
The All-Ireland champions had a straightforward passage past O’Loughlin’s in the semi-final and it’s hard to see how the Village can strategise a way through this although their mix of youth and experience could be expected to take advantage if the Shamrocks have deflated after the exploits of the past season but there wasn’t any significant sign of that last week and the return of Michael Fennelly has helped to re-energise the challenge whereas the youthful edge of Eoin Cody and Adrian Mullen up complements the orchestration of TJ Reid (below). Tough gig for anyone. Verdict: Shamrocks

WEXFORD SHC FINAL
St Anne’s v St Martin’s, Innovate Wexford Park, 3.0
Anne’s have a nice momentum after a good semi-final win against Rapparees got them back to a final for the first time in five years and they are capable of springing a surprise here, a task facilitated by the suspension of Rory O’Connor, which is a blow for Martin’s who nonetheless remain favourites. Verdict: St Anne’s

Solskjær’s stock is on the rise again after clever squad rotation 08:58
Dundalk ready to take on Arsenal; Tyrone facing Conor McKenna dilemma 07:22
Ireland, France or England? Who needs what to win the 2020 Six Nations 07:00
America at Large: Golfers guilty of legitimising Trump’s toxic regime 06:00
The sky’s the limit and then some for Edel Thornton 06:00