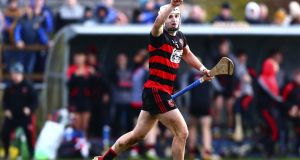 Ballygunner got the defence of their Munster club hurling championship title off to a winning start, when they had a merited 12-point victory over Clare champions and home side Sixmilebridge on Sunday.

The six-in-a-row Waterford champions led from start to finish and laid down a strong marker, with former Brighton and Hove Albion footballer Dessie Hutchinson in fine form in attack. Having defeated De La Salle by nine points in the county final, the Gunners buoyed by that win came to Clare in a confident mood.

Hutchinson landed their first score, a point from play in the second minute, and added another moments later. Alex Morey got the Bridge off to a start with a pointed free but by the sixth minute, Ballygunner had opened a 0-5 to 0-1 lead.

The Sixmilebridge defence was porous on a number of occasions early on and just before half-time their goalkeeper Derek Fahy had to be alert to save a certain goal from a marauding Barry Coughlan. Eventually the backline did cave and Hutchinson was in for the game’s only goal in injury time, sending the visitors to the dressing rooms with a 1-13 to 0-7 advantage.

After the break Ballygunner piled on more pressure and with Pauric Mahony unerring from frees, they forged ahead. Hutchinson could have had a second goal early in the half but was blocked down by Seadna Morey. However, taking their points was part of the script and by the end, an impressive victory was achieved, setting up a home tie against recently crowned Limerick champions Patrickswell next weekend.