A county final is a day in the life of a place by itself, but it only matters to who it matters to 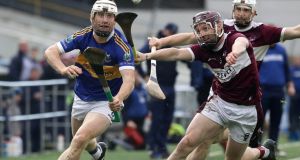 Walking up to Semple Stadium last Sunday, it felt like the time had come for a new entry on the colour palette. You know those cards you get in the DIY shop when you’re thinking of giving the spare room a lick of paint? Various gradations of each colour and whatnot? Well, make a bit of room on the grey entry, chaps. Because there ain’t no grey like the grey of a November Sunday in an Irish country town.

It was Thurles on Sunday but it could have been any of them. Mullingar, Carlow, Killarney, even. Places you last visited at the height of summer, towns that fizzed and frothed back then with the unmistakable feeling of something happening. When you’re back for the club championships and the rain is all around like wallpaper, all the colour drains.

If you just moseyed along on a whim last Sunday, you would have been hard-pushed to imagine anything earth-shattering was happening

The club championships are fun but they are their own particular type of fun. There’s no hats or flags or headbands outside the ground. There’s no buskers on the walk up, no open guitar cases with a few stray coins to tempt you into a few more. There’s no traffic, no problem parking. These are all to the good.

Added altogether, though – or subtracted altogether, if you like – it means the sense of occasion is always harder to locate and to plug into. These are small events, proudly and determinedly so. They are Kavanagh’s local rows, gods of the parish making their own importance. Outsiders can come and look but you find it harder to be touched.

Classic of the genre

The Tipperary county final was a classic of the genre. For Borris-Ileigh and Kiladangan, it was the be-all, the end-all, the everything-in-between-all. Kiladangan went in as marginal favourites, having beaten Borris in the North Tipp final already and looking for all the world like a first-ever county title was within their grasp. Borris hadn’t won Tipp in 33 years, even though a river of good hurlers had flowed through the place since 1986. Whatever happened, a year of years was about to be crowned, a day to be talked about for generations.

And yet, if you just moseyed along on a whim last Sunday, you would have been hard-pushed to imagine anything earth-shattering was happening. Club hurling can be bitty enough going at the best of times – throw a November downpour onto a November pitch and let’s just say the ingredients for a classic weren’t exactly in place.

There was a semi-comical sequence just before half-time when a Kildangan sideline cut traversed the full width of the pitch to go straight out across the far sideline, followed by the Borris wing-back cutting his one up the line but not keeping it in play, followed by the Kiladangan corner-back cutting his diagonally into the first row of the stand. Referee Fergal Horgan blew the half-time whistle immediately, presumably on the basis that at least he could guarantee ball in play at the start of the second half.

This is all in the eye of the beholder, of course. To the good people of Borrisoleigh and Kiladangan, the quality on show couldn’t have been less important. Neither, for that matter, could they have given less of a tuppence for the level of entertainment provided or whether a half-interested visitor went away feeling they got full value for their afternoon. A county final is a tight, close thing, a day in the life of a place by itself. It matters to who it matters to.

That’s the beauty of it. And when you can tell the story of a place like Borrisoleigh, which has seen tragedy heaped upon tragedy over the past couple of years, there’s a hook there to make it palatable to a wider audience. Everybody understands loss and everybody understands what sport can do to leaven it. You don’t need to be able to pick Borrisoleigh out on a map of Tipperary to be able to relate to what their seventh county title means.

At the same time, it frequently feels like we make bigger claims for the club championships than they deserve. You get told a lot that this is the real GAA, as if the intercounty stuff is a figary or a luxury or little more than a sop to the GPA. As if you’re somehow less than pure if you prefer a July evening in Páirc Uí Chaoimh to a winter afternoon there.

Partly it’s the marketing. Hashtag the Toughest, all that stuff. Although quite why we should be taking pointers on realness from AIB – just the 12,180 tracker scandal cases and €265 million set aside to deal with it as of June this year – has never made much sense.

The club championships have their charms, of course they do. But you wouldn’t want to overstate them, either

But partly too it’s a media construct. There are weeks and months of columns out there to be written about the GAA losing its soul and getting disconnected from its roots and all that yadda-yadda. Nobody has ever run out of bullets when using Croke Park for target practice – this column included. But eventually there’s a whiff of protesting too much about some of it.

The next big frontier is the GAA calendar, down for fixing – ostensibly once and for all – over the next 12 months. One genuine suggestion apparently in the mix is the ending of the intercounty season in mid- to late-July to make room for the club championships. As if they haven’t already given enough to the other sports by scrapping the two great pillars of Irish cultural life, the September All-Ireland finals. The irony of attempting to reinstate the lost soul of the GAA by messing with the most two identifiable GAA days of the year seems to have escaped a lot of the club truthers.

The club championships have their charms, of course they do. But you wouldn’t want to overstate them, either. Even if you remove November grey from them, they’ll still be local affairs, cared about deeply but singularly by local people. They can’t plug into the communal heft that sustains and drives a GAA summer.

Asking them to would saddle them with a burden they are inherently unsuited to bear.