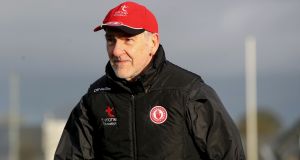 Mickey Harte is the new manager of the Louth senior footballers. The former Tyrone boss has wasted no time in getting back involved with a county team after the Tyrone executive declined his request for a one-year extension less than a fortnight ago.

Harte had managed Tyrone to three All-Ireland titles during an 18-year tenure which ended with an Ulster quarter-final defeat to Donegal earlier this month. It also brought to an end his most recent three-year appointment.

Harte now takes over from Wayne Kierans as Louth manager, on a three-year term. His former player turned coach Gavin Devlin will be joining him. Devlin has been Harte’s right-hand man since the start of the 2013 season, and, as well as being named as Louth’s new assistant manager, he will also join his former minor, under-21 and senior manager in taking over the county’s Under-20s.

Former AFL player Ciarán Byrne, who returned to Louth last year and is hoping to put his recent injuries behind him to play a major part in the 2021 season, told The Irish Times that the appointment is a huge boost:

“It’s great news. I’ve had a bumpy road but had prepared myself for a big go at it from next year, and this appointment gives an even bigger boost. It’s what the Wee County needed.”

Louth decided not to extend Kierans’ two seasons in charge, after a disappointing season when they were relegated from Division 3 of the league with just two points, before losing to Longford in the first round of the Leinster championship.

A Louth GAA statement on Monday evening read: “We would like to give Mickey and Gavin a very warm welcome to Louth and we look forward to working closely with them over the next three years. Special word of thanks to our sub-committee of Peter Fitzpatrick, Bob Doheny, Sean McClean, Aidan Berrill and Francie McMullen for their hard work over the last few weeks overseeing this appointment.”

Up to this winter the longest-serving intercounty football manager in the game, Harte led Tyrone to all three of the county’s senior All-Irelands, in 2003, 2005 and 2008, as well as All-Irelands at minor and under-21 and six Ulster titles. He was named Manager of the Year in 2005.

However, after just two Ulster titles in the past 10 years, following five and three All-Irelands in the previous decade, the Errigal Ciarán club man had come under increasing pressure in recent years. Nevertheless, he navigated Tyrone back to the 2018 All-Ireland final, while his team lost by three points in last year’s semi-final against Kerry.

Plans for his final year at the helm were hit hard by the loss of All Star full-forward Cathal McShane to a season-ending injury, after Harte had built his attack around the man he convinced to turn down an AFL contract.

Harte told Declan Bogue in an interview published in the Irish Examiner: “I didn’t get to fulfil my last year properly. And that’s all I wanted. I was now prepared to say openly that this is my last year.

“We came back on the 14th of September and we had that short space of time, that short window to prepare for what is now a knock-out Championship. And it was not what we expected to be dealing with from the start of the year.”