Provincial decider becomes a game of half chances, crunching tackles and errors 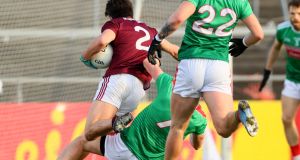 When it comes down to it, these counties hold up a mirror to the other. If Galway need to know who they are, then Mayo will probably offer the most honest answer and bluntest reflection.

The main worry around the football strongholds in the county this week was whether Galway’s defensive set-up could withstand the robust stress-test of Mayo’s gung ho attacking game. Everyone knew Galway had pace and skill to burn up front. That part of the game came easy to them. Except here.

They didn’t put enough on the scoreboard and what might have bloomed into an exciting winter - a last four visit to Croke Park in Pádraic Joyce’s first season in charge - has become a bitter pill to swallow. It’s not that Galway should have won this game. It’s that they could have.

At half-time, Mayo’s total was just 0-8 due to a combination of Galway’s defensive stickiness and the visitors’ erratic shooting. Infuriatingly for Galway, six of those Mayo scores came off their own turnovers. They had made Mayo look limited creatively. And while their kick out had been absolutely ransacked by the Mayo midfield collective when the teams met in Tuam for their delayed league fixture, they were immaculate here. Bernard Power’s inclusion paid off: he was precise in his delivery and made a huge 65th minute save to keep Galway’s day alive.

So the fundamentals were right. And when Gary O’Donnell stole along the right wing to curl a point just seconds after the restart, Galway suddenly looked well placed to make their old rivals suffer. But they couldn’t quite ease into their game nor could Mayo put themselves into a safe place with the result that this Connacht final deepened into an uneasy game of half chances and crunching tackles and a litany of errors.

As an overall contest, it was poor. As a live spectacle, it was redeemed by a series of riveting individual battles, with Paddy Durcan’s assignment on Shane Walsh and Sean Kelly on Aidan O’Shea the pick of the bunch.

Paul Conroy gave a phenomenal show of substance for Galway. He was pretty much un-markable, forcing Mayo to try both Lee Keegan and Stephen Coen to give it their best shot. Both the Kellys were excellent here while Walsh had a mixed afternoon, landing two beautiful scores but failing to convert two late frees he would expect to land. The big disappointment for Galway was their failure to create the space in which the attacking gifts of Ian Burke and Michael Daly could fully flourish.

And because it was such a sickening game to lose, it was a perfect way to win for their opponents. Mayo didn’t look as sharp here as they did in the early outings of this guerilla campaign but it felt like a match that brought a young group on.

“We made so many mistakes and did daft things,” admitted Horan. “Played a bit tentatively today but to stick in and keep at it. There were a few huge moments in the game - Mattie Ruane had a turnover out here around the 45 and Eoghan McLaughlin as well and Paddy at the end. So we are delighted.

“We won a Connacht title. We had five games on the trot, had to go away to Leitrim, to Roscommon and to Galway. And to hang in there over the last four or five minutes was an achievement.”

McLaughlin was a force of nature going forward and was black carded for hauling down Paul Kelly as the Moycullen men tore through on goal in the 73rd minute. It was close to a penalty and was a blatant, intentional foul. And it arguably won the final for Mayo. This was an afternoon when their emerging players like Oisin Mullin and Matthew Ruane and Tommy Conroy were once again prominent in both plays made and leadership.

The assumption that Mayo would revert to the dogs-of-war characteristics and faces hasn’t materialised so far, with Keith Higgins the only one of the veteran brigade to come in from the bench. And it was another up-and-coming player, Bryan Walsh, who had the meatiest impact from the bench, firing 0-2 into the breeze in that second half as Mayo managed to keep their noses in front.

The effects of Mayo’s marauding campaign, with three weeks on the bounce, really told during the final 10 minutes. Their energy sapped and they were penned in a little as Galway came chasing the late score to take the day, the season, the dream, into a period of extra-time. And it was the score that just wouldn’t come.