Tipperary and Cavan deliver two earthquakes in one day 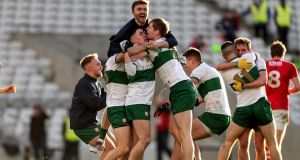 Bloody 2020, eh? In this year of oddity, in this championship of miracles, the race for the Sam Maguire is still a going concern in . . . checks notes . . . ah yes, Cavan and Tipperary. That’s Cavan, without an Ulster Championship in 23 years. And Tipperary, without a Munster crown since 1935.

One earthquake at a time, lads.

Between them, they pulled off a Sunday that we had long since presumed was beyond the scope of the football championship. It started with Tipp, drawing all the unlikely strands of their footballing history together to beat Cork in Páirc Uí Chaoimh by 0-17 to 0-14. On the centenary weekend of Bloody Sunday, they wore the white jerseys with the green hoop that their forebears had worn in November 1920. Boy, did they do them justice.

“This is very, very emotional,” said their manager David Power afterwards. “I know the 100 years of Bloody Sunday is one thing, but this is 85 years. I always believed this was going to be our day because there has been a lot of hard work.

“Tipperary football needed to win a senior title and we could have won by a bit more because we played some seriously good football. There was an inner belief in the side. Over the past two weeks we always believed we could beat Cork. I didn’t have to say that. The players knew it themselves.”

Some days, the planets align. In an ordinary year, Colin O’Riordan’s holiday home from life as a Sydney Swan wouldn’t coincide with a Munster final. He played his first game in a Tipp jersey since 2015 and caught two monumental kick-outs at the end to see them home. Michael Quinlivan and Liam Casey had opted out of the Tipp squad this year, tired of the road and the beatings and the lack of a life. The pandemic kept them at home and Quinlivan especially played his best game in years.

To do it on the centenary of Bloody Sunday is obviously a quirk of happenstance. Power has been at the coalface of Tipperary football too long to attribute a win like this to some kind of ethereal magic tumbling down through the decades and on to their heads. He’s seen too many false dawns, been put in his place too many times. Within his own county and without.

“The likes of Philip Austin, Brian Fox, Conor Sweeney, Alan Campbell have been there for years and it’s great for them. Today is great for the team, but it’s also great for Tipp football in general. Yes, hurling will always be number one, but now people will want to play football for Tipperary.

“The centenary was just one aspect of today. But the main focus was on the game. It was an honour to wear that green and white jersey but we left it at that. Because if we got caught up in the emotion of it all we might have got caught. Winning on the weekend that was in it is absolutely huge. I thought the ceremony on Saturday night was fantastic. This win is brilliant PR for Tipperary football.”

In Armagh, the Ulster final was no less an adrenaline shot to the heart. Cavan came in as abandoned outsiders playing their sixth game in six weeks and seemingly without a shot. After 70 minutes of endeavour, they drove off into the night with a 1-13 to 0-12 victory, a scoreline that if anything flattered Donegal. Conor Madden’s 70th-minute goal sealed a result that their performance richly deserved.

“It’s the year for the upset,” said full-back Padraig Faulkner. “I was listening to [Tipperary’s win] on the radio on the way up, so I did know about it and it does give you faith. When Cork beat Kerry, Kerry were the biggest monsters meant to put it up to Dublin and Cork went and done it. It’s no good when you don’t back it up with a title but Tipperary beating them today, it does give you the incentive. If they can do it, anyone can do it.”

Well, yes. In theory. But the football championship has been mighty light on anyone can do it for quite a while now. A Tipperary team with All-Ireland underage pedigree beating a coming Cork team is far-fetched but it’s within reality’s realm.

Cavan taking down Donegal a couple of hours later, after so many years of empty campaigns – well that’s just outlandish in the extreme. Mickey Graham came to the Cavan job two winters ago vowing to improve their awful record in Ulster. Even he couldn’t have guessed they’d do it so quickly and so emphatically.

“Definitely not,” he said. “Definitely not. But let’s be honest about it. We’ve had a lot of ups and downs the last two years. Anything that could happen to try and stop us making inroads, happened. Between losing players, Covid, new players coming in – we faced a lot of challenges.

“But what we have now is a panel of players who are all in it for the right reasons. We have a bunch of lads who are going to go down dying for each other. You can’t put that into a team. That has to come from within.”

Mark Twain said the difference between writing fiction and non-fiction is that fiction has to be believable. What a joy it is not to be confined by the fusty rules of make believe.