Will ‘third week syndrome’ kick in for Cork and the other qualifier teams down the line? 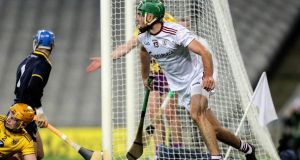 Galway’s Brian Concannon has been in impressive form for the 2017 champions. File photograph: Inpho

Another huge weekend of hurling rolls along and with it potential issues surrounding the impact of scheduling on teams. In the two years of the provincial round-robin, we got used to the phenomenon of ‘third week syndrome,’ which generally meant a fatigue-related drop in performance levels for teams lining out for three successive weeks.

This may prove relevant to Cork, who are out for a third weekend running. Oddly, the only county this affects over the weekend.

There is also another longer-running issue. Since Cork 15 years ago, just one All-Ireland has been won by the Munster champions, Tipperary in 2016.

I strongly believe though, this year is going to be different. The scheduling is so frantic that instead of sitting around for weeks after winning Munster, the winners get a fairly optimal two-week break whereas the qualifier teams will be on at least their third week - and possibly more - running by the time the All-Ireland semi-finals come around.

We’ll watch that with interest.

In the meantime I’ll be particularly focused on Saturday’s Leinster final. Limerick have had two outings and confirmed the strong showing against Clare by doing it again in the Munster semi-final with Tipperary. They are without doubt the form team so far.

Of the likely challengers, Galway have been far and away the best of the rest - judged on their display against outgoing Leinster champions Wexford, who they overwhelmed. Can they confirm that against Kilkenny?

It’s an excellent test. There will be no smoke and mirrors from Brian Cody’s team, who always show up - but will they be better than their form suggests? In the first half against Dublin they were really good, moving the ball through the lines and scoring almost effortlessly. TJ Reid was at the top of his game and they looked better than last year.

Dublin’s second-half comeback raised questions about Kilkenny because the form line doesn’t look great now given how Mattie Kenny’s team struggled against Cork a week later although it’s fair to point out that they were the first team to do the three weeks and they gave their poorest display of the championship.

Galway have established a really strong record in this fixture. Even last year when they got caught in Parnell Park on the last day of the Leinster round robin, they had still managed to win in Kilkenny along the way.

They look refreshed with new management, some good new players like Fintan Burke and a potent blend of the familiar physical presence with scoring capacity. Conor Whelan’s form against Wexford was really threatening and Brian Concannon also brings menace. It’s going to a busy day at the office for Huw Lawlor, whoever he picks up and I assume it will be Whelan.

Kilkenny to me don’t appear to have enough strength in the backs to counter Galway at their best. Another positive about Shane O’Neill’s team is that Joe Canning is back playing a key role like when they won the All-Ireland in 2017 and not all the key roles, as happened the following year in what was a reversion to the previous norm.

They’re also benefiting from two things: not having to play the round-robin format and quite possibly having all of their matches in Croke Park.

In Thurles on Sunday it’s hard on all known form to see Waterford stopping Limerick but in the semi-final win over Cork, their half backs looked as if they could give the champions more problems than Tipp managed. Tadhg de Búrca was in exceptional form with Callum Lyons also impressive.

There’s not a completely new look to them but Austin Gleeson was very good in an advanced role and Dessie Hutchinson has added a bit of cut to the attack.

But the big challenge for any team facing Limerick is how do they cope with the middle third? Waterford have good, strong hurlers but who’ll mark Gearóid Hegarty? Kevin Moran is the direct opponent but he tends to drift rather than do specific man marking jobs.

Similarly, what will they do about Cian Lynch if he goes to centre forward like he did against Tipp? Is de Búrca going to sit back again? Hardly likely. There are serious tactical questions for Waterford and I doubt if they’ll all be answered.

No matter when they play each other, Cork and Tipp matches are hard to call and 18 months ago at the start of the 2019 championship I called it all wrong. Tipperary are All-Ireland champions but they don’t look in the sort of shape they were in last year.

It will stand to them that they are still stung by criticism and the need to get that really disappointing display against Limerick out of their system, and of course that Cork are out for a third week.

The way their opponents set up will suit Tipp with less pressure in the middle third. One of Cork’s main weapon wills be the pace at which they can play but conditions in the Gaelic Grounds won’t help that.

On the basis that their forwards won’t be choked for ball again, I go narrowly for Tipperary to win what’s likely to more of a shoot-out than the last day.

The first qualifier match between Clare and Wexford has been overshadowed by the clash between Brian Lohan and Davy Fitzgerald. Clare haven’t been impressive and in fact were very poor against Limerick and the ensuing narrow win over Laois doesn’t suggest form that’s going to sustain them.

But Wexford weren’t much better and their natural running game is hugely compromised by conditions and although I’ve no strong convictions on this, the prolific from of Tony Kelly is something Fitzgerald’s team simply don’t have and Clare can spring a surprise.