On a different day against a better team, Mayo might not have got out of this one 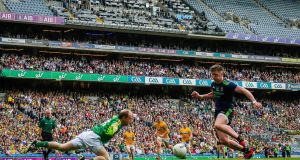 Hard to know how many more of these Mayo have in them. On a different day against a better team, there’s no guarantee they’d have got out of this one intact. With 20 minutes to go, they were two points down and would have been three had it not been for a badly skewed wide from Meath flyer Cillian O’Sullivan. Knowing what we know about them, we can surmise they’d have found a way. But not with any huge certainty.

And yet, and yet. Eight weeks ago, when they coughed up that careless defeat at home to Roscommon, the summer was simplified for them very quickly. Sit them down at that point and tell them they’d need to win a home game against Donegal to make an All-Ireland semi-final and they’d have taken you elbow and all. It’s knock-out stuff from here on in. Historically, they’ve thrived on the high wire.

For all that their younger crop have impressed at times this summer, this was strictly old school. They outscored Meath by 2-10 to 0-7 in a second-half performance driven by Colm Boyle, Andy Moran, Lee Keegan and Cillian O’Connor. Kevin McLoughlin’s game-breaking goal went: Meath kick-out, Moran catch and crossfield pass to O’Connor, O’Connor to Keegan with one defender to beat, Keegan to McLoughlin all alone inside, McLoughlin with a shimmy and a shake and that was goodnight.

Across a 12-minute period from the 54th onwards, they turned in one of those flash-fire Mayo spells that seem to flare up out of nowhere. They outscored Meath 1-5 to 0-0 during it, routing Andrew Colgan’s kick-out and having their way with them from there.

“Yeah, it’s an important part of it,” said James Horan afterwards. “If they have a kick out it’s usually from a score or where you’ve had a shot so it’s a good time to try and squeeze it. But they were very effective at it in the first half. We kept at it, figured it out.

“They went a couple of points up in the second half and I think we got some return on their kick-outs - a few of them went over the sideline, Seamie [O’SHEA]broke a few, that gave us the momentum again. We went three points ahead then we really kicked on. That made a difference.”

It was needed. Meath have miles to go before their lung capacity can sustain them when the air is this thin but they were capable of making this awkward for long stretches. They lost Mickey Newman to a hamstring strain in first-half injury-time and though his replacement Shane Walsh kicked five frees, he also missed a couple at crucial times, neither of which was overly difficult. But then, Walsh is 19 and was playing in his first senior game in Croke Park. He will have other days.

“He’s well able for it,” said Andy McEntee of Walsh afterwards. “He showed that against Clare when he came in and took a vital free. He’s very capable of it. He certainly didn’t get bullied out there today. Any ball that went into him stuck pretty well. I was happy with the job he did.”

Ultimately, experience told the tale. Mayo played out the first half looking at times as if they knew it would. The sides went in level at the break at 0-7 apiece, which was just about the very least Mayo could have scored with the possession they had. They put up five wides to go along with those points and dropped four balls short. Allied to some pleasingly sticky Meath defending, it made for a fairly moribund opening half all around.

The best goal chances in that first half fell to Meath, particularly Donal Keogan’s on the 15th minute. Collecting around 25 metres out, Keogan skinned Seamie O’Shea to get in behind but planted his shot at the legs of David Clarke. The ball squirted loose and Newman knocked the rebound over the bar.

At the other end, Darren Coen was doing okay for Mayo, scoring a point and laying others on for Fionn McDonagh, Fergal Boland and McLoughlin. So much so that it looked a little harsh that he got the bullet at half-time, to be replaced by Moran. But such was the old warrior’s influence on the second half that it was hard to have any quibbles.

If Colm Boyle was unquestionably man of the match, Moran was the man of the second half. From his first two involvements, he set up Fergal Boland and O’Conner for points from play. Then he scored a point of his own. Then he caught the kick-out that set up McLoughlin’s goal. Then he got fouled for an O’Connor free. Everything he did gave Mayo impetus and momentum, precisely what they needed when they needed it.

Onto Castlebar in a fortnight, so. Donegal on the menu, winner gets the dinner. Mayo are flawed in so many ways but they still bring a weight of experience with them to red alert situations that almost nobody else can. On such teetering things does their summer sit.