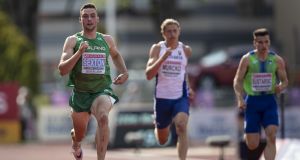 Aaron Sexton was run out of the medals in the 200m final. Photograph: Maja Hitij/Getty Images for European Athletics

Proof perhaps why it’s such a rare thing for Ireland to deliver a European sprint medal at any level, as gold medal favourite Aaron Sexton found himself narrowly run of the top three by the closest margin imaginable in the 200 metres at the Under-20 Championships in Borås, Sweden.

No Irish man had ever before won a sprint medal in the under-20 grade, these championships going since 1964, and even if Sexton was fastest on paper in the race, he had to settle for fourth place in 21.18 seconds - the same time as bronze medal winner Matttia Donola from Italy.

Victory went to the Dutch runner Onyema Adigida in 21.08, with the German Elias Goer taking the silver in 21.16, only it was clear disappointment for Sexton, who had been leading in the straight only to fade over the last 50 metres.

The 18-year-old Bangor athlete, already signed and committed to the Ulster rugby academy once he gets home, was racing in his last individual race on the track and was determined to leave the best possible mark. Starting out of lane five, Sexton running in the slight headwind, it seemed the efforts of the two earlier races may have taken some toll.

Already Ireland’s fastest ever schoolboy in the 100m and 200m, Sexton was also the fastest of the eight finalists, his lifetime best of 20.69 clocked with winning the school’s title back in June. But have eased his way through the three semi-finals earlier on Saturday morning, the fastest of the lot there with his 21.13 seconds, Sexton was left agonisingly short of a medal, losing out only on the photo finish.

Immediately afterwards Davicia Patterson found herself in a similar position, finishing a close fourth in the women’s 400 metres, clocking 52.72 seconds, victory there going to the Russian Polina Miller, competing under the neutral flag, in a very impressive 51.72 seconds

The 18 year-old from the Beechmount club in Belfast was the fastest across the two semi-finals with her 52.81 seconds, but it just wasn’t to be in the final.

There are still some hopes for more Irish medals, after Kate O’Connor had made it medal number 16 since 1964 when who winning the heptathlon silver medal on Friday evening, the first by an Irish woman, at any level, in the seven event discipline. The 18 year-old from the Dundalk St Gerard’s athletics club, who is coached by her father Michael O’Connor, was rewarded with silver after her total of 6,093 points also smashed the existing Irish senior record - also the first time any Irish woman has surpassed 6,000 points.

Earlier, Sommer Lecky came very close to another medal in the high jump final, in a crazy close contest, finishing in joint fifth best of 1.84 metres.

There were fine performances by both Irish the 4x400m sprint relay teams. First the women’s quartet of Simone Lalor, Miriam Daly, Laura Nally and Rachel McCann booked their place in Sunday’s final, improving the Irish under-20 record to 3:41.28 in the process. Another run in that territory will put them in the mix for the medals.

Following that were the men’s quartet of Ciaran Carthy, Adam Hughes, Jack Raftery and David Ryan who also went safely through to the final, third in their heat in 3:13.72.

Sarah Healy, who won double gold over 1,500m/3,000m at the Under-18 championships last summer, is also through to her 1,500m final on Sunday evening with strong medal hopes, fittingly one of the last track events, while Darragh McElhinney also goes in the 5,000m as the only Irish teenager to break 14 minutes with his 13:54.10.