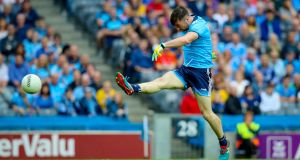 For Roscommon, it could have been worse. As 18-point drubbings go. They were staring down the barrel of the gun early in the second half on Saturday night, when Michael Darragh Macauley’s unexpected thunderbolt of a goal pushed Dublin into a 2-17 to 0-7 lead.

Roscommon had 14 men on the field and that unit suddenly looked very lonely and vulnerable. They got out with their pride intact and afterwards, Anthony Cunningham outlined the challenges in facing the Dubs in high-July form.

“Look, physicality . . . we would be a number of years off their physicality,” Cunningham explained. “They are a seasoned team at the level we have put a solid year into. Gym work and physicality to have as part of your armour doesn’t come overnight.

“But they have a huge football brain, massive athleticism and speed, a strong midfield. Their goalie is exceptional and has transformed the kick-out mantra over the last 10 years. Their U-20s won as well on Friday night there and they have players coming through so they top it up every year. We can get there but it will take time.”

The sight of the Connacht champions being torn apart so easily will increase the anxiety over the prospect that the Dublin senior team has become a runaway train. That “we can get there” assertion seemed optimistic, given what had taken place.

Last year, when the teams met at this stage it finished 4-24 to 2-16, a 14-point gap. On Saturday night, the gap was 18. Roscommon are a team doing everything right and Cunningham is a manager with a terrific track record. No manager is going to say that the cause has become hopeless but Cunningham was adamant that other teams can make up on lost ground.

“You can. You see all the talk that Dublin have this, have that. I think every county has it but needs to get their house in order and to keep doing it at the professional level that Dublin have set.”

Having beaten Mayo and run Tyrone close, Cunningham has a good sense of what the other leading teams have to offer. He smiled when asked if he could see Dublin being beaten.

“It is difficult to say that they could be beaten. They have so many players to come in. We all lose players but Dublin, it doesn’t matter who they lose through injury, They have players who can slot into any position. That, and experience.

“You would always like to say that they will allow you to play. Probably take a Donegal or Tyrone and they may sit back and invite you on. But Dublin will always let you play and give you opportunities to score. And when you get those, you have to take them.”

Jim Gavin played a straight bat when considering Dublin’s next fixture and said that the fact that both teams are now through to the All-Ireland semi-final won’t change the approach.

“No, not for us. Any time we play Tyrone lately they have been great games. We played them last back in March and they look very fit. They are a very good side with an outstanding manager and outstanding management team so we will prepare for that game as best we can and give it our best shot.”