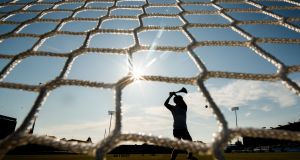 Galway qualified for an All-Ireland minor hurling semi-final against Wexford with a 1-9 tally from Seán McDonagh key to the win over Clare at O’Moore Park.

Three down at the break, Clare fought back to lead by three midway through the second-half, but four points from substitute Seán O’Hanlon helped Galway over the line.

Needing a six-point win to qualify, Clare got off to a bright start with Shane Meehan to the fore, but after McDonagh pointed a ‘65 and a free, an excellent score from Alex Connaire put Galway 0-4 to 0-2 ahead after 11 minutes.

Clare had plenty of success working the ball upfield from their uncontested puck-outs, but a fine Colm Cunningham effort and an instinctive McDonagh point soon had Galway four clear.

Meehan continued to be a threat as Clare clawed their way back, and despite McDonagh’s successful penalty in the 28th minute, the Munster side did well to only trail by 1-11 to 0-11 at the interval.

Facing an exit, Clare tore into second-half and scored five of the first seven points to level matters by the 37th minute, while two in a row from Meehan put them ahead soon after.

Clare substitute Seán Ronan pointed twice after his arrival but despite a late goal from Cian Galvin, four points from O’Hanlon saw Galway to victory.