Patton proving his worth as Donegal’s undisputed No 1 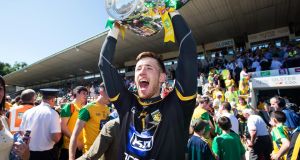 In Donegal, there exists a parallel universe in which Seamus Coleman is storming along the right flank in Clones or Croke Park rather than knuckling down to pre-season with Everton.

The Killybegs man is the most extravagant example of former and future county Gaelic football players who became ‘lost’ to soccer, from Packie Bonner to Declan Boyle to Shay Given.

Of course, there’s also a sliding doors moment in which Declan Bonner, the current manager, stayed at Celtic as a youngster, never kicking that copper-plated insurance point in the 1992 All-Ireland final and not on the sideline in Croke Park against Kerry tomorrow.

“Declan was a class player. I think it’s well known that he was very unfortunate not to get signed that time at Celtic – I think it was just down to a change in manager,” says John Lafferty of Bonagee United, the club where Shaun Patton, Donegal’s crossover goalkeeper, first learned his trade.

“I saw Declan playing an over-40s game there and he was better than a lot of young lads out there. Some left peg. Sure Patrick McBrearty, too, played schoolboy and academy level. There’s a lot of players who have played both and then made their decision. But we are all delighted here that Donegal has worked out for Shaun.”

If the zone defence was the analytical obsession of the decade, then the goalkeeper’s kick-out has become the prevailing fascination of this summer. Teams can plan assiduously and diligently for months but if they can’t win their own kickout – if they can’t keep the ball – then they invariably struggle for oxygen.

Stephen Cluxton has provided an enviable launch pad for Dublin through their four-year reign as All-Ireland champions and through his decade as the nonpareil of Gaelic football, the goalkeeper’s influence on the game has changed radically. When Patton made the decision to accept Bonner’s invitation to join the senior squad ahead of the 2018 season, the national reaction was muted.

Although he had made his senior debut for Finn Harps at just 16, his seasons with the Ballybofey club and, later, at Derry City and Sligo Rovers, were spent as an understudy. Not all that much was known about him. Donegal already had two experienced goalkeepers in Mark Anthony McGinley and Peter Boyle.

Patton wasn’t even particularly well known on local Gaelic football fields, having played just a handful of times for St Eunan’s in 2014, when Maxi Curran guided the Letterkenny team to a county title and through Ulster championship games against Roslea and Omagh St Enda’s. But after that, Patton disappeared into the League of Ireland.

“At that time, Paul Durcan was unrivalled and unchallenged when it came to the Donegal spot,” says Declan McIntyre, the former Finn Harps goalkeeper who first began coaching Patton when he was a teenager.

“And I have never discussed this with Shaun but he probably realised he wasn’t going to get past Paul at that time. And he had this dream, too, of fulfilling his dreams in soccer.

“He probably hoped to get into League of Ireland teams at a young age and maybe get spotted by some of the clubs in England. When I first coached Shaun, he had already made his debut because of an injury to Ciarán Gallagher (Harps first choice goalkeeper that season). He applied himself really well, so much so that he made an Irish U-19 squad under Paul Doolin at that time.

“The other goalie chosen was Ian Lawlor, who was with Man City then. It always made me smile when you’d see the squad list: Ian Lawlor: Manchester City. Shaun Patton: Finn Harps. But Paul was aware of his performances in the U-19 league and he had asked me about him and I told him he was a great wee prospect. And he was that.”

McIntyre coached Patton at Harps and with Derry. As a teenager, his shot-stopping was his most obvious attribute. However, even as a youngster with Bonagee, John Lafferty remembers being struck by the formidable length in Patton’s kickout. “Just this long, long kick.”

But for top tier football, Patton’s restarts carried too much height. With McIntyre, a dedicated chunk of time at every training session was spent refining the flight and trajectory of those kicks.

“So that it became more like a pass: he could land it at the head, chest or feet of the outfield player to control.”

In Sligo, Patton held the goalkeeping role along with Michael Schlingermann, the former Mayo minor All-Ireland winner who is now back with the senior county squad.

“They would just practice and practice,” says McIntyre. So it was no real surprise for him to see Patton transfer that skill onto the Gaelic fields.

Over the course of Donegal’s Ulster championship run, the range, variety and pinpoint accuracy of Patton’s kickouts have attracted rave notices. After their Super 8s win over Meath, Sky television analyst Peter Canavan highlighted the huge forward thrust generated by a series of kickouts which Patton delivered to Donegal’s totemic playmaker, Michael Murphy.

In studio, Kieran Donaghy emphasised the point: if Kerry weren’t aware of the potency of Donegal’s kickouts before this, they were now. But the signs had been there from the beginning.

When Donegal played Derry in last summer’s Ulster championship, Cahir O’Kane of The Irish News noted that the 24 out of 27 success-rate Patton achieved in his restarts didn’t tell the full story. The other three kicks had also found green and yellow shirts but the recipients had fumbled possession through a variety of ways.

And Derry’s attacking players only gave the Donegal man the option to go short on five occasions. It was, O’Kane argued, maybe as close to the perfect kickout performance that Patton or any goalkeeper could hope to achieve.

“It’s not by accident,” Declan McIntyre points out. “I remember going down the town to play underage games with Donegal Town against Kilcar all those years ago. And you’d arrive to see Martin McHugh practicing his 14 yard frees and his 21 yards frees. There’s a reason people develop kicking skills like that. People may think it that kicking a ball is just a gift. Shaun’s kicking ability is down to six years of hard work with Finn Harps, Derry City and Sligo Rovers. He worked on it every single day. It has reached the point now where it is natural to him at this stage.”

The bigger challenge is making the overall adjustment from soccer to Gaelic football.

“He has good positioning and understanding of the game,” McIntyre says. “Technically, he is clever. But yeah, moving from being a soccer goalkeeper to becoming a Gaelic football goalkeeper: they are different animals really. The big change he would have found is that in soccer, he was obviously the only one who can handle the ball in the 18-yard box.

“So you can be totally dominant and the master of that area. That is your patch. But now all the opposition and team mates can also handle the ball so no Gaelic goalkeeper can dominate that area. It is really the six yard box that you need to be the dominant force and your big decisions are: do I stay or come for the ball? Do I punch or catch? He is probably still learning that a little bit.”

When Durcan, Donegal’s former All-Ireland winning goalkeeper and two-time All-Star, returned from a period working in Dubai and rejoined the Donegal squad in February, it further deepened their options in that area. Durcan is 35 years old; prime time for goalkeepers. He carries a huge reserve of experience and ability.

The Donegal Town man’s restarts became a key instrument during Jim McGuinness’s time in charge and were the weapon with which Donegal unlocked Dublin for that monumental All-Ireland semi-final upset in 2014. But Patton’s conversion was so smooth and impressive that Durcan has remained as understudy along with Michael Lynch since his return.

“It’s not a selfish group,” Patton said after the Ulster final win of the internal contest for the number one slot.

Tomorrow’s match is the first championship meeting between Donegal and Kerry since the All-Ireland final of 2014. That afternoon, tactical and cagey, hinged on a kickout, when Kerry, exerting intense pressure on Donegal’s restarts, enabled Donaghy to intercept one of Durcan’s restarts and plunder a hugely important goal.

Durcan shipped the blame even if the fault lay more with the lack of options or available bodies outfield; nothing highlighted the precarious fate of the goalkeeper’s life like that moment. Patton himself held his hand up after a loose kickout gifted Cavan a late goal in this year’s Ulster final: the contest was long over but it was a vivid illustration of how one stray restart can come back to haunt a goalkeeper.

All practitioners, even Cluxton, have experienced those setbacks. The spotlight will intensify now that Patton returns to Croke Park with Donegal for what is the showdown of the Super 8s weekend. He is 23-years-old and remains, in terms of experience, a very new Gaelic football goalkeeper. But for once, soccer’s loss has been Gaelic football’s gain in Donegal.

John Lafferty remembers calling into Michael Murphy’s sports shop in Letterkenny a few times over the past year, which was Patton’s place of work prior to his recruitment for the Garda.

“It was amazing to see” he says. “Because you’d go in after some of those big games Donegal would have and you’d see Shaun in the store and behind the counter, just working away. You look at the soccer in England and boys getting millions. These fellas are playing at a professional standard, really, in the All-Ireland. And then they are back at it the next day.”