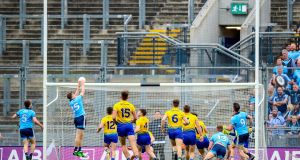 The Dub Nation marches on. After a fascinating duel between Cork and Tyrone in the Saturday evening curtain-raiser in Croke Park, the All-Ireland champions duly laid waste to Roscommon in a match which was always travelling in one direction.

After a week in which the return of Diarmuid Connolly to the Dublin panel generated a tidal wave of excitement, the St Vincent’s man was not included in the panel. This latest win advertised how steep a climb he faces just to make the field for warm-ups.

Dean Rock, promoted to the starting 15 along with the returning James McCarthy and Jonny Cooper, grabbed his chance by bagging 1-11 of Dublin’s overall haul. Paddy Small came in after 39 minutes – when the All-Ireland champions were a full 2-10 clear – and argued his case with a neat 0-3.

Meanwhile, Jim Gavin spent Wednesday evening scouting the suburbs for other candidates in club games and the electrifying 3-8 return by Ciarán Archer in Dublin’s U-20 routing of Kildare on Friday night can’t have made Kevin McManamon or Bernard Brogan or the other gilded veterans of the Dublin squad feel any younger.

“There is great competition for places and they will all play whatever part we ask them to play,” Gavin said afterwards.

“Good to see the guys who finished the game as well playing strong. Other players didn’t get game time today and I know they’ll be hungry when we go back training next week.”

The overwhelming nature of this win will heighten the sense that for almost all teams in Ireland, playing Dublin has become an unpleasant test of endurance and potential humiliation. Roscommon played some good football here, finishing with 0-14 and they created the opportunities to land 2-17. Two cards to Conor Daly reduced them to 14 men in the second half and they had the moral courage to keep trying long after Dublin had left their orbit.

But as a contest, it was effectively over when Rock posted a personal tally of 1-5 after just 15 minutes. Up front, Ciarán Kilkenny, Paul Mannion and Con O’Callaghan ran amok. None of the other Dublin players were under the remotest pressure.

Gavin replaced that trio early in the second half, which was a subtle act of charity. The profound difference in the teams existed in the upper-body strength and power of the city team. Individually, they could smash through the Roscommon cover at will.

Afterwards, Gavin emphasised the ‘humility’ his team had shown in the warm-up. And the warm-up was interesting to watch. All top teams run similar drills but the counties with the most interesting variations this summer have been Dublin and Donegal.

Most teams like to play keep ball to get the heart rate up, playing possession hand-pass games in confined sections off the field. On Saturday night, Dublin ran the same drill but with kick-passing. Before that, they went through a drill emphasising block down on the foot pass. After that, they ran the three-man-weave goal-shooting drill they’ve been running for years except now the two outside players break a tackle.

It was a small glimpse into what they’re at in Parnell Park during the nights. And what stood out was the intensity with which the big-name players who have seen little or no game time this summer played their part.

Gavin takes criticism for repeating the same stuff about the squad and work-rate. But the living proof of it was on the field. Maybe the biggest transformation within Dublin has been the disappearance of individual ego. There is no showboating, no rubbing it in your face, no ostentatious celebration. They just take care of business

Has the GAA spawned a monster? It’s a question will become more pressing as Dublin’s unbeaten streak continues.

Just over a decade ago, Dublin and Tyrone drew a crowd of 81,000 for a league game which marked the first game under floodlights at Croke Park. Both counties featured here in an All-Ireland quarter final series which attracted just 36,000. Those figures aren’t encouraging and deepen the conviction that if this Super 8s concept is to become permanent, the games need to be held in more compact grounds.

As it is, this group has been decided with two games to go. Dublin will visit Tyrone on the August Bank holiday for a tussle to decide which team tops the group.

If Connolly’s name is to feature in a match programme this year, this would be the game. Cork and Roscommon, meanwhile, find themselves in the strange world of being out of the All-Ireland race but still in the championship.

They are obligated to bow out of the competition by playing each other for the honour and the glory on the same weekend. After an encouraging summer for both teams, it is a hollow note on which to take a bow. Dublin, meantime, are assembling for the last charge and it remains to be seen if there is a single team left out there capable of living with them.