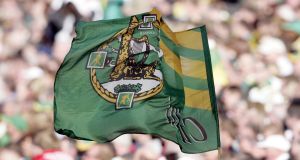 Three goals in the second-half paved the way for Kerry’s junior footballers to win their fifth All-Ireland title in a row as they finally shook off the challenge of Galway at O’Moore Park.

With Garry Kelly in terrific form for the Tribesmen, the Connacht champions had pulled level two minutes after the interval, but an unfortunate own goal from corner-back Thomas Rabbitte in the 34th minute gave Kerry a lead they would never relinquish.

Further goals from the excellent Stephen O’Sullivan - who finished with 1-4 - and substitute James Crean eased Kerry nerves as the Kingdom’s impressive record at the grade continues with their 20th win.

Kelly was in devastating form for Galway and despite the loss of Enda Tierney to a sixth minute black card, his accuracy had them 0-5 to 0-4 clear by the 13th minute.

But two of those points came from decent goal chances, while Kerry goalkeeper Eoghan O’Brien also denied Colm Brennan as Galway didn’t make the most of their opportunities and trailed by 0-8 to 0-6 at the break.

Kelly and Seán Ó Currin soon had Galway level though, but when Barry O’Dwyer’s attempt at a fisted point dropped short, Rabbitte’s momentum meant he couldn’t avoid the own goal, and Kerry never looked back from there.

Conor McGregor feels like he’s ‘only starting’ in UFC career 13:02
TG4 to show matches and highlights from AFLW 12:40
Garry Ringrose returns as Leinster and Munster name teams 12:24
Mick McCarthy set to be appointed Cardiff manager 11:39
Arsenal hopeful of signing Martin Ødegaard on loan 11:33
Crossword Get access to over 6,000 interactive crosswords