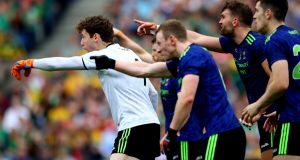 James Horan knows the drill here. Mayo have been doing this for so long now that he’s long since had his fill of amateur dramatics. They made a meal of this when they didn’t need to. More importantly though, they got out of it when it looked for a while like they might not have.

“We need to be compelling, man!” Horan cracked afterwards. “That’s what keeps us all going, isn’t it? Yeah, there’s a number of ways to win a game. The odd boring shitty one would be fine as well. Look, as long as we keep plugging away I’m happy enough.”

That it wasn’t as straightforward as it should have been certainly bugged Horan but only up to a point. It wasn’t like they were being beaten all over the field, it was more that they weren’t making their best bits count for something. That’s always a fixable kind of problem.

“The amount of possession that we had, we dominated the game. Dominated a lot of categories of the game. If we kept plugging away, even though we were missing that many, we were still confident we’d get enough possession.

“The amount of turnovers we gave away was shocking at times. We kept plugging and kept fighting, like we’re doing all year. I suppose our reward is a two week lead into a game so that will be good, that will put a lot of players back into contention.

“I think it’s hugely important. The last five or six weeks we’ve just had one session a week and it’s really just maintenance. There’s not a lot you can do, we were travelling and we were both ends of the country. It’s good now to be able to plan the lead into a game.”

For Andy McEntee, this was a familiar scene. Not for the first time this summer, his side really put it up to a superior opponent, only to be let down at crucial times by their performance in front of goal. The credit you get for the first part is always outweighed by the debit on the other side. This didn’t feel like a nine-point game, not by any stretch.

“Whether it did or didn’t, the truth of the matter is they finished the game stronger than we did,” said McEntee. “Five points, six points, eight points, nine points, ultimately for us it didn’t make a whole pile of difference, we needed to get a win against one of the bigger teams and we didn’t do it.

“We put ourselves in a position to do it and we just didn’t do it. It’s frustrating for the lads, I feel for them, they have put in a huge amount of work, we have made progress but it’s a pretty tough learning place. We just have to go and get better.”

McEntee’s team is young and has practically no experience playing against elite teams this late in the summer. It probably explains the poor finishing to some extent?

“Maybe a little bit of that. Maybe we got a little bit tight, we saw the finishing line, they weren’t difficult chances by the normal stretch. You would expect fellas to get them. But it is hard work out there. They have put in a huge effort and maybe mental fatigue as much as physical fatigue sets in at that stage. I don’t want to give the message that I’m being hard on the players because they have been fantastic.

“I think that’s one part of it. Maybe it’s experience. There’s a lot of young fellas on that team there, a lot of guys who are sub-24. And maybe you have to go through this learning experience to get out the far side of it. I don’t know. What I do know is that we have to be better for longer.”