Tyrone quell Rebel’s yell to close in on semi-finals 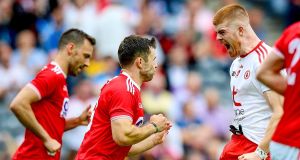 This could have changed everything. After what started out as another strangely subdued Super 8s contest, things soon heated up into what felt like proper knockout, and with that Tyrone quickly turned the screw as they so often do.

Cork were the only ones to breathe any real football into the first half, and with that it seemed also the final round of Super 8s to come. Up by seven points midway through that first period, and looking every bit the better team, they had Tyrone left rattled in their hum.

Only for everything to change during a four-minute spell from the 42nd minute - two goals in swift succession suddenly giving Tyrone the advantage, forcing Cork into the chase and to eventually surrender at the death.

It effectively guarantees Tyrone an All-Ireland semi-final place, but they earned it the hard way here. Trailing Cork 2-4 to 0-5 at the break, something needed to change and change fast, and that came first with a brilliantly simple goal finished by Cathal McShane, the short sequence of passing beginning with Mattie Donnelly to Michael McKernan. McShane deftly slam-dunked the finish, and signed off for the evening with 1-5 in all, three of them frees.

Peter Harte promptly added a neat free and then fired Tyrone in front for the first time with a smashing penalty kick, awarded after Niall Sludden was pushed in the back by Mattie Taylor as he closed in on goal. Harte also finished with 1-5 next to his name, three frees too.

Just like that Tyrone were up 2-7 to 2-5, and from the hunters Cork were now the hunted. Still they turned the screw back on Tyrone a little, a series of three points from replacement Michael Hurley bringing them level again on the hour. Now it all felt like proper knockout, Cork playing to avoid the likely dead rubber contest against Roscommon in the last round.

Up stepped Harte and McShane again to restore Tyrone’s advantage, Tiernan McCann also coming off the bench to add one of the clinching points. Donnelly also played the captain’s part chipping in with his third from play in the vital period, as Cork’s scoring rate fell just off.

Even with two late scores, a fourth from Hurley and fellow replacement O’Rourke, Cork were left chasing in vain and McShane fittingly had the final say with his free.

After conceding 3-3 in the last 10 minutes against Dublin last Saturday evening, Cork’s defence were expected to come under a different sort of pressure with the headline solo act that is McShane, although they were ones to promptly as questions of the Tyrone rearguard.

After winning the throw-in, Ian Maguire tore straight through the heart of the defence and passed off to Luke Connolly, who blasted into the Tyrone net after just 14 seconds; their second goal on 18 minutes, finished by James Loughrey not long after he was sprung from the bench, was even more impressive, shot straight into the top of the left, with power to boot.

Still most of the first half played out as a hand-pass fest, with Tyrone struggling to cope with Cork’s pace and movement, on and off the ball. Mickey Harte’s three half-time replacements - bringing on Richard Donnelly, Michael Cassidy and Padraig Hampsey - a clear sign that something had to change, and help change everything it did

When they met in last summer’s round four qualifier in Portlaoise, Tyrone eased past Cork 3-20 to 0-13: Cork will certainly feel like they’ve closed that gap, only for now it appears Dublin will be left to shadow box with Tyrone on Sunday week in Omagh, while Cork will host a dead rubber contest against Roscommon.

This could have changed everything.

1 Man City to investigate Kyle Walker over lockdown sex party
2 Potential Robbie Keane exit could prove costly for FAI
3 Cigala caught in the crash as cycling’s Zwift League series heats up
4 Simon Zebo: ‘It’s been tough not being able to put my hand up to play with Ireland’
5 Dundalk’s €2.5m resurfacing on schedule to finish in June
Real news has value SUBSCRIBE