Wicklow in seventh heaven as they thrash Antrim 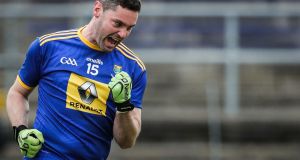 Davy Burke was beaming delight in Aughrim on Saturday as his Wicklow footballers turned in one of their best displays in living memory to beat fancied Antrim by 25 points in their crucial Division Four league game.

Antrim went into this match second to Limerick at the top of the league table but Wicklow have taken their place with this win to take in pole position for promotion, as they head to Wexford next weekend for their vital final league match.

This victory was richly deserved by Wicklow as they dominated this encounter from start to finish, even though Antrim tried to stage a comeback in the third quarter without any appreciable results to show for their effort.

Wing forward Kevin Quinn gave Antrim an early lead with the opening point after two minutes but the remainder of the 40-minute half was dominated by a rampant Wicklow who went on a goal rush.

Corner forward Seanie Furlong scored the first goal from a penalty after wing back Dave Devereux was downed in the box, and he was followed by three-pointers by Padraig O’Toole and Cormac Byrne as Wicklow led by 3-5 to 0-1 at half time.

It could have been more as they spurned at least five good chances for further points. Barring an Antrim miracle, effectively it was game over at that stage.

Antrim did show some improvement in the third quarter, but their two goal chances banged off the woodwork. Wicklow resumed their command performance with further goals from Seanie Furlong, Patrick Burke, Eoin Darcy and Gearoid Murphy to run out big winners.

Three players received black cards during the course of the match, two of them from Wicklow.