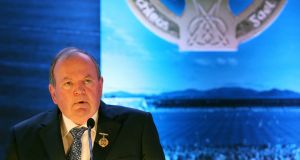 Former GAA president Liam O’Neill believes the association must keep the option open of cancelling the championship should the coronavirus situation worsen in the country. Photograph: Andrew Paton/Inpho

Former GAA president Liam O’Neill has said he believes that there would be support for the association were it to have to call off the intercounty season, which is due to start at the weekend.

He doesn’t necessarily advocate that as a position but mindful of the deteriorating public health environment, says that it may become necessary.

“We empowered management to take these decisions and they have made good decisions all the way through,” said O’Neill. “I would though caution them that if it comes to it that the intercounty championship has to be called off before it gets started – if things go badly in the next couple of weeks; in that context I think people will understand.

“I think there’s some comfort in that. If the hard decisions have to be taken it will be for the best and accepted as such. If everything goes without much of a hitch that will be brilliant too, but realistically the situation is again difficult.”

O’Neill, who was president between 2012 and ’15, strongly argued during the first wave of coronavirus earlier in the year that the best thing would be to forget about 2020 and concentrate on making sure that next year proceeds smoothly.

He had no issue with the roadmap unveiled in the early summer, which set out a calendar of fixtures for both club and county but believes that caution is now needed.

“I made no comment on the decision of Coiste Bainistí because I was part of the authorising process that gave them the responsibility to make those decisions and I accept them fully but I’d love them to consider the possibility – do we really need this or have to do it? Maybe have that discussion about whether we may be walking ourselves into trouble.

“A pandemic is such a serious event. I know people haven’t died in the sort of numbers we feared earlier in the year but nobody knows where this is going.

“There are also questions still lingering over the safety of our intercounty players. It’s okay so far but activity has been mostly within our counties. Now to finish the league programme counties are going to have to be criss-crossing the country.”

The former president also accepts that evolving medical and scientific advice led to the return of the games and helped to defuse concerns about social distancing on the pitch but he also referred to the abrupt termination of club activities a week ago amid indications that some post-county final celebrations were helping to spread Covid-19.

“My view all along was that if it’s safe, go ahead and I have to say it was nice to see the few games we had this year.

“The club progressed but we suspected all along that it mightn’t finish and to a certain extent it hasn’t. You had most of the finals played and no one really minds what’s left now because the narrative is that the club games went ahead, which they did but they haven’t finished and may not until next year even though many of the outstanding finals have no bearing on intercounty teams.”

There have been two significant issues on which the GAA has had to make hard choices. Initially there was no organisational enthusiasm for playing matches behind closed doors but that changed – maybe with the experience of other sports widely available.

Secondly there was always the prospect that teams might have to withdraw because of incidents of coronavirus within county panels, as happened to Fermanagh in the past weeks, with uncertainty now hanging over the county’s Division 2 match against Clare, scheduled for Ennis.

O’Neill points out that teams have already been omitted from league and championship because of the public health situation.

“We already have excluded some counties: the overseas units like London, Lancashire, Warwickshire and of course New York. That’s a pity because competitions aren’t the same without them.”

He is concerned that a matter of just weeks before the run-in to Christmas, the GAA shouldn’t put itself under immense pressure to deliver something that, while it’s being looked forward to, is not essential.

“Does it really matter now? I’d love someone to stand back and ask that. Does the intercounty championship really matter? We thought at the start of the all this that it would be terrible to go the rest of the year without an intercounty game but we’ve kind of survived without it.

“I would have preferred if we’d not put that pressure on ourselves. I’m not saying that the intercounty championship isn’t important for many people but the whole effort we’re making is to try and do what we normally do but in unbelievably difficult circumstances.

“I fully accept that the officials in Croke Park have to make those decisions, as does everyone tuning into remote meetings to agree these things. If things change and the country’s not as safe as it was and we had to take the decision to pull the plug I don’t think there’d be any hostility to that from the GAA public. I think people understand how serious things are.”

On a lighter note, he’s not convinced that the GAA can as easily go down the road of other sports in recording the sounds of supporters to add atmosphere to broadcasts from virtually empty stadiums.

“Nobody will be able to produce digital tracks to do justice to shouts of, ‘Laois, Laois’!”

1 Cian Healy: ‘Realistically I got away with murder when I was younger’
2 Liverpool maintain perfect start but count cost with Fabinho injury
3 Bartomeu resigns and drops bombshell of Barcelona joining European Super League
4 Robbie Henshaw likely to be the only Irish change for France finale
5 Seán O’Brien: Anger over my parents’ break-up never left me
Real news has value SUBSCRIBE