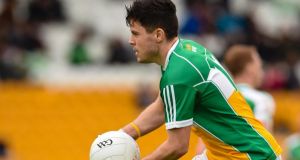 Offaly brought the curtain down a tumultuous few weeks with a deserved win over Antrim in Bord na Mona O’Connor Park on Saturday.

They gave a solid performance under new manager Paul Rouse, who stepped in after Stephen Wallace’s controversial sacking. With Brian Darby and John Moloney back on board and both playing well, Offaly made things difficult for themselves when Nigel Dunne was red-carded in the 43rd minute.

Offaly were 0-13 to 0-9 ahead at that stage and it looked like being a dogfight when Antrim got the next two points. The home side played their best football after this, scoring 1-2 without reply, with the goal coming from the in-form Bernard Allen in the 49th minute to take control. Leading 1-16 to 0-11, Offaly had enough done to hold on comfortably as Antrim went out very tamely.

In the first half, Offaly were the better team but Antrim were more clinical and had their noses in front for much of it.

However, injury-time points from Michael Brazil, Niall Darby and Bernard Allen gave Offaly a 0-10 to 0-7 lead and the break. And it would have been more only for a big missed goal chance for Offaly just before those three points. John Moloney had almost an open goal in front of him when he was denied by Antrim corner back Peter Healy with some of the home crowd adamant it should have been a penalty.

Before that, there had been plenty of nice open football, albeit at a very different intensity than the top level, with Antrim leading for much of it as the sides were level on six occasions.