Joanne O’Riordan: Kerry happy to leave woes of spring behind 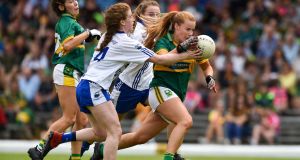 If there is one thing for certain in Kerry concerning women’s football it’s that they are happy spring has sprung and we are entering a new dawn. Already this year we have seen a woeful league campaign, a managerial saga which saw the minor manager sacked by email in February, a handful of resignations and other drama in between.

But in Fitzgerald Stadium on a balmy early summer’s day, the Kerry women returned with a massive statement of intent. Before the game new Kerry manager Eddie Sheehy said that regaining the TG4 Munster Women’s Football Championship was his initial aim as the rebuilding began following a bizarre sequence of events both on and off the field.

First, Kerry were docked three points for fielding an unregistered player in their 2-14 to 2-6 Lidl National League victory over Mayo in February. To compound their problems they were relegated from the top flight, and manager Graham Shine stepped down at the end of April.

Off the field a bizarre sequence of events involving management and county board officials was unfolding. Mike Moriarty and Maurice Dunworth stepped down from their respective roles as chairman and secretary of the Kerry LGFA in February, having only held their positions for less than a month.

Their resignations followed women’s minor manager Jonathan Griffin’s sacking via email. He had been let go the week of Kerry’s minor championship first-round clash with Tipperary after over eight months of preparation.

It all pointed to rancour within the Kerry set-up but if you’ll excuse the Brendan Rodgers-ism, the Kerry women showed great character last weekend.

Goals from Sarah Houlihan and Andrea Murphy helped them waltz past Waterford, a surprise to supporters at the game. Granted, Waterford will be kicking themselves having kicked eight wides in the first half.

The Kerry midfield just blitzed through Waterford, with Lorraine Scanlon kicking three points. Not even a late goal from Waterford substitute Maria Delehunty could take the gloss off the Kerry score, and Kerry go marching on after their 2-16 to 1-6 win.

As with the Kingdom’s men’s team, they can gain confidence from the demolition of Waterford. They can look forward with glee as their woeful league performances fade in memories. Now it’s all about planning for a Munster final against Cork.

As for the Rebelettes, it was a simple case of being efficient in their work against Tipperary. A well-worked fisted goal by Brid O’ Sullivan, which involved Shauna Kelly, Libby Coppinger and Orla Finn, was capped off by a Hannah Looney penalty. Tipperary, to their credit, battled on, but Cork were soon out of sight. Ultimately there would only be disappointment for Tipperary, who include Cork stalwart Elaine Harte in their management team.

Tipp came off a stellar Intermediate campaign, winning the All-Ireland and gaining promotion to Division 1 after a controversial final saw them past Cavan. They have plenty to look forward to, not least with the Cahir scoring trio of Roisin Howard, Aishling Moloney and Aisling McCarthy, and teenager Anna Rose Kennedy, who only recently broke into the team.

The future seems bright for the Munster teams, but we still have to learn if the women’s final will form part of a double-header at Páirc Uí Chaoimh on Saturday, June 23rd.

Eight women’s football league games were played as part of double-headers this spring, with Kerry’s semi-final win over Waterford a curtain-raiser on Sunday to Kerry’s comprehensive defeat of Clare. With the GAA, Camogie Association and LGFA drawing up a unified memorandum, it would be an utter shame if the opportunity for both the women and men to play in Páirc Uí Chaoimh is missed.

I don’t want to take away from the minor game, which will see Kerry take on Clare, and I also am well aware Páirc Uí Chaoimh may not be able to cater for a triple-header. For now it looks like a non-runner.

Without having a go at county boards, it is a sad state of affairs that Mayo, Dublin, Kerry, Donegal and many others have had double-headers, yet Cork, who have dominated, inspired and been the standard-raiser time and time, are still once again left waiting on empty promises.

It would also be a shame to review the LGFA without mentioning Armagh’s win over Cavan. In a result that shocked many – Armagh won their first Ulster championship match since 2014, when they went on to claim the Ulster crown. Managed by James Daly, they will not fear Monaghan or Donegal or anyone else that comes their way.

All in all, there were thrills, spills, joy, sadness and sunshine. To paraphrase the infamous line from Oliver Twist: Please LGFA, can I have some more?