Buckle up for an unprecedented weekend of GAA madness 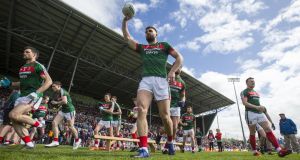 Mayo are among those in action in the All-Ireland SFC qualifiers this weekend. Photo: Cathal Noonan/Inpho

Whether or not it’s quite what Cusack and the lads had in mind when they gathered in that hotel billiards room long ago is difficult to be dogmatic about. But whatever they started, it’s fair to say there has never been a GAA championship weekend like this one. Between football and hurling, there are 15 games down for decision. If we extend that to include the Joe McDonagh Cup, that number rises to 18. Presumably, tomorrow night’s Sunday Game will finish just in time for the Monday commute.

All points north, south, east and west will host games. Croke Park, Semple Stadium, Nowlan Park, the Gaelic Grounds. Salthill, Clones, Navan, Tullamore. If the usual trends are followed, somewhere north of 160,000 people will go to games across the country between 1.30 Saturday afternoon when Wexford host Waterford in the first round of the football qualifiers and teatime Sunday when the final whistle will sound between Dublin and Longford in the Leinster semi-final.

A combination of the new format in hurling and the rejigged schedules in both codes means that we’ve reached the endpoint of the summer far earlier for some counties than has been the case in a generation. Offaly were the first hurling team to find their duty all ended last weekend, making it the first time their interest in the championship was done so early since losing to Kilkenny in the first round of Leinster on May 30th 1993.

For some football counties, Saturday will call time on shortest summer since the introduction of the qualifiers 17 years ago. Eight counties are done and out the gap by close of business this evening – no replays, no sagas, no more chances. If there are draws, there will be extra-times. If there are still draws after those, there will be free-taking competitions. It’s going to happen at some stage – if not Saturday then eventually. Buckle up when it does.

The sheer whizz-bangery of the new hurling reality has hidden from view what has been a quietly pleasing football championship. Ulster has seen three shocks and counting, putting Donegal on notice this weekend that Down don’t make it four. Leinster may understandably cower in the shadow of the dreaded Dubs but the presence of Carlow and Longford in Sunday’s semi-finals is not nothing. Longford won’t win but Carlow might. Imagine Carlow in a Leinster final. Madness.

And those qualifiers have their charms as well. True, for some teams they’re just a staging post before the summer holidays. But for others, they’re a field hospital, a place to do some patchwork repairs on the go. Mayo’s road back has started here for the past three seasons so they know the road and will surely do their duty in Limerick.

Tyrone and Kildare won’t be just as bullish about their trips to Meath and Derry, though. There has been skin and hair flying in both counties since their first-round defeats. Seán Cavanagh has annoyed people in Tyrone by pointing out what everyone else has been saying about them for years. Cian O’Neill is in mortal danger in Kildare if the ructions reported from this week’s county board meeting are anything to go by.

It’s hard to imagine anyone who needs a winning weekend more than O’Neill and Mickey Harte. Maybe Kieran McGeeney, whose Armagh side are headed for Mullingar. All three of them are bookies’ favourites but all three are also on the road. Will all three be safe in their jobs as they sit up the front of the bus on the journey home? You’d look at a €20 note for a good while before you’d pass it across the counter to back that treble.

That said, if it’s going to be hard to know where to look at times this weekend, the hurling will generally solve the problem for you. Kilkenny and Wexford play off a de facto Leinster semi-final in Nowlan Park on tonight, their fourth meeting of the year already. The prize for the winner is a final against Galway in three weeks, whereas the loser has a month to prepare for whoever comes through the Joe McDonagh Cup. The mind games alone will be worth the admission fee.

And yet nowhere do the games feel more vital or vibrant just now than in the Munster hurling championship, round four of which plays out tomorrow. Limerick host Waterford in a game where no neutral can bear to see a loser. Tipp’s carnival ride of a summer continues in Thurles with Clare the visitors. You’d need a four-day weekend just to fit it all in.

For those in need of respite, help is at hand. There’s only three games next weekend.

4 Leicester go top at halfway point; It’s not the time for IRFU to be slashing salaries