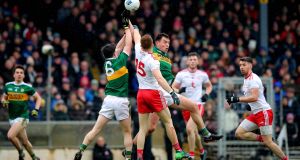 It was the perfect start for new Kerry boss Peter Keane as he presided over an opening day win over arch-rivals Tyrone at Fitzgerald Stadium.

Sean O’Shea sparkled with his finishing, class and creative endeavour, his six points pushing the Kingdom to an uncharacteristically strong start to their league campaign.

They had a big part of the job done by the halfway stage, having held the Red Hands to a single point in the opening 35 minutes, that one scored by their goalkeeper.

In the meantime, a hard-working Kerry side chased in packs and put last year’s beaten All-Ireland champions under extreme pressure, forcing a succession of turnovers that had a major impact on the outcome.

And the elegant O’Shea struck accurately from placed balls to put his side in charge of the contest.

“We’re pleased enough with everyone. You should try and win your home games,” said Keane.

“It was an exceptionally difficult opening one to have, but all the home games are going to be difficult this year, and the away ones won’t be bloody easy either.

“But it was a win, and I’d say we’ll find it very hard to go to Cavan next Sunday. If we’d lost, I wouldn’t be overly concerned, but we’ve won and I’m not overly concerned or delighted either which way.

“Look, it’s a process, you’re trying to build something, so today is just the first step in that.”

It took Kerry 12 minutes to get their opening score, O’Shea hitting a couple of frees, and it was 34 minutes in that the big crowd of 12,921 witnessed the game’s first score from play, with impressive debutant Dara Moynihan hitting the target twice as his side went in with a healthy 0-5 to 0-1 lead, ‘keeper Niall Morgan getting Tyrone’s sole point from a long range free.

Tyrone introduced Kyle Coney, who helped them move to a more offensive strategy in the second half, and Darren McCurry tapped over four frees as they clawed their way back.

But Kerry defended deep, with 15 men inside their own ‘45 at times, and broke at pace for Jack Barry and Tom O’Sullivan to maintain a decent gap.

They repeatedly frustrated the Tyrone attack with intense tackling, with Tom O’Sullivan and Paul Murphy playing influential roles, and it was O’Shea who applied the coup de grace with a brilliant late point from a sideline ball.

“The fact that they have won five Minors in a row, anybody who would look beyond that would be rather foolish, because we had a few good minor teams in the past and we thought we got great success out of that platform,” he said. “So to have five-in-a-row is an amazing feat to have happened.”

Harte felt his side’s first half display left them in a difficult position as the chased the game against a highly motivated Kingdom side.

“I think that they set up very well there today, probably won the game in the first half, and I would be disappointed in that we missed some chances that were quite scoreable.

“Kerry went in 5-1 up, but we gave them a few of those scores by our errors, if you like. You might call those unforced errors in normal terms, but perhaps they were partially forced as well.

“So you talk about errors and we talk about unforced errors, but I think it was to do with the pressure that Kerry put on. You have to give Kerry credit for putting huge pressure on us, to maybe cause some of what we would call our mistakes.

“But they got scores from two or three of them, which left them very comfortable at half-time. I think with a few different twists and turns in that game it could have been a drawn game at half-time.