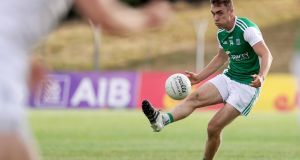 A dramatic last gasp mark in the 74th minute from Fermanagh’s Conall Jones gave the home side a draw against 14-man Cork in a thrilling affair at Brewster Park.

Jones mark was moved forward for dissent and his equaliser was greeted with a huge roar by the home crowd.

But this was a match the home side should have won as they dominated the second half after a poor opener where Cork led by 0-4 to 0-1.

And they hit eight wides from very scorable positions in that second half.

But, it looked like Cork had snatched victory against the run of play when their best player Ian Maguire set up wing back Matthew Taylor for a clinically finished goal in the 60th minute.

Taylor’s cool finish put Cork into a 1-5 to 0-7 lead as the Ernesiders threw everything into snatching the points.

But hasty shooting resulted in some glaring wides before Jones late rescuing act.

It looked bleak for the home side as they trailed by 0-4 to 0-1 at the interval, Jones getting their sole score from an early free with Luke Connolly, Damian Gore, Eoghan McSweeey and James Loughrey all replying for Cork.

Cork had only one point in this half, coming from Luke Connolly and relied mostly on breaks.

They also lost combative wing forward Ruairi Deane to a second yellow card in the 45thminute.

And he left the field to loud applause from the partisan home fans.

Fermanagh settled swiftly and went into an early lead when Conal Jones pointed an early free after Declan McCusker was fouled after two minutes.

But that was to be their only score of the half as a physically superior Cork side equalised through Luke Connolly.

It was turgid stuff with scores at a premium - but Cork looked the more enterprising side as both teams played very defensively.

Damian Gore put Cork into the lead when he converted a mark in the 10th minute.

Eoghan McSweeney extended that lead in the 15th minute and that signalled a 15 - minute scoring famine.

The Leesiders were well worth their 0-4 to 0-1 half-time lead.

But the home side upped the ante in the third-quarter and were transformed.

They created lots of chances but will surely feel that this was a point dropped in a merciless Division.