Padraic Davis’s side victorious despite being without their Mullinalaghta contingent 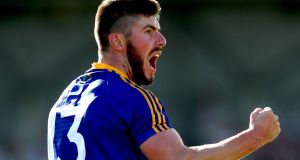 Depleted Longford held off a spirited second-half fight back from 13-man Louth to bag a crucial away win in Drogheda.

A bright start by the home side yielded points from Conall McKeever and Ciaran Downey, but Longford eventually opened their account in the best way possible when Robbie Smyth slapped to the net from close range in the 14th minute.

That goal proved the difference between the sides at the break as Longford adjourned with a 1-3 to 0-3 advantage, and with Conor Early sent-off on the run-in to half-time, Louth had it all to do in the second period.

They lost another midfielder to a red card when Tommy Durnin picked up a harsh-looking second yellow, but with Peter Lynn and then Shane Donohoe spending almost consecutive spells in the sin-bin Longford’s numerical advantage was diluted somewhat.

Down to the bare bins as he awaits the return of his Mullinalaghta contingent, Padraic Davis only made three substitutions, but all three hit crucial late scores as Joe Hagan, Darragh Doherty and Nigel Rabbitte made sure of what could be a vital victory.