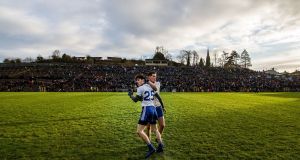 Nothing warms a small town in January like sending the Dubs home with their hides tanned for them. In front of 8,556 perished souls in Clones, Monaghan turned around a six-point deficit to open the 2019 league with a win and in the process became the first team to post back-to-back victories over Dublin under Jim Gavin.

Malachy O’Rourke’s side have the guts of a month more in the tank in terms of work done on the training ground and as the game reached its zenith here, it started to show. The crucial move in the game came when O’Rourke sent Conor McManus and debutant Stephen O’Hanlon in off the bench in the 43rd minute with Monaghan a goal behind.

With his first involvement, O’Hanlon took a high catch and immediately decided that if anyone was waiting on him to take a mark, they would be left for dead. He bore down on goal and shimmied around Evan Comerford to bring Monaghan level.

Four minutes later, McManus did something similar, eschewing a mark from a brilliant Jack McCarron through ball to put O’Hanlon away – with his second touch, the youngster put it on a plate for Shane Carey to palm home.

McCarron was man-of-the-match when these sides met here in 2017 and was the game’s outstanding performer again. Yet the two displays couldn’t have been more different. Two years ago, McCarron was the surprise package in the Monaghan forward line, jinking this way and that and running up a brilliant 1-9. This was an altogether more mature day’s work, full of strong-pulling and scheming and no little physicality.

“Jack did really well, yeah,” said O’Rourke afterwards. “He got on the ball a lot and used it really well. I think it was Jack who put the ball through for the second goal and I thought it, in particular, was a really good team goal. Conor could have taken the shot and he laid it off to Stephen. Stephen could have taken it and he laid it off to Shane and he palmed it into the net.

“We’re delighted with our work-rate and hunger and attitude. I thought that was top class. Early on, when we were behind, it was a matter of not panicking and getting back into the game. So there was a lot of pleasing aspects to the game.

“Look, Dublin are the benchmark for every team. As you say, they lose very few games. Even though it was the first game and they were missing a few of their first team, we had a few out as well. That has been the way most years but they’ve always won even despite having a few missing. It was a chance for us to measure ourselves against them. It’s early on in the year but we’re delighted with it.”

All the same, this looked a reasonably straight-forward outing for the Dubs for much of the opening half and even for a while in the second. They were 1-6 to 0-3 up inside the opening 17 minutes and Monaghan looked to be running in sludge.

Niall Scully got in for an early goal, albeit with a hint of a push on Karl O’Connell. That said, McCarron was lucky not to see a red card later in the half when his knee connected with John Small’s head so there are swings and there are roundabouts.

Dublin were never out of their comfort zone until, all of a sudden, they were. Con O’Callaghan had three points from play on the board inside the first 37 minutes and Brian Fenton was his usual imperious self. But the double substitution changed the game.

What changed most of all was Monaghan’s use of the offensive mark. Unsurprisingly, McManus showed himself to be particularly adept at finding the room to get out in front and be found. Five of Monaghan’s points came from marks, as compared to just one for Dublin. A sure sign that they’ve had more time to think their way around them, what with the Dubs only having started training together again in the past fortnight.

Given that it was our first meeting with Jim Gavin in 2019, we took our chance to ask his opinion on the whole rules issue. Judging by the impression he gave, Dublin won’t be giving over huge banks of time trying to scheme up plans for them.

“We’re playing an experimental rule,” he said. “Those rules will be gone in a couple of weeks’ time so we’ll just get through it as we can. It’s a unique situation where players will go back to their clubs and play under a completely different set of rules.