Donegal make a winning start to life in Division 2 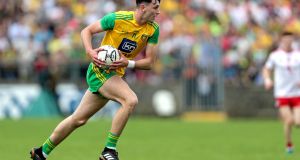 Declan Bonner's Donegal picked up two valuable Allianz Football League Division 2 points when they had a three-point triumph over Clare at Cusack Park Ennis on Sunday.

Played in difficult conditions, this was an entertaining contest, with the outcome in doubt right up to the end. But in the end, Donegal’s experienced carried them through.

The Ulster side opened the scoring with a pointed free by Michael Langan. Clare then struck back with scores by Gary Brennan from play and a free by Keelan Sexton. The hosts then missed a good chance when Sexton hit the side netting from close range.

It was nip and tuck for the rest of the half and when David Tubridy split the posts on 33 minutes, he levelled matters at eight apiece. But Donegal finished clinically with injury time scores by Jason McGee and Niall O Donnell, to leave them 0-10 to 0-8 ahead at the break.

Clare struck three early second half points by Tubridy (two) and Gary Brennan. Donegal, for their part, shot five wides in the opening ten minutes. But Jason McGee eventually stopped the rot to even matters up by the 47th minute.

Three further scores by Caolan McGonagle and pair of points by James Brennan opened up a three point lead for visitors. But the game was still in the balance as the game entered injury time.

A late Clare point by substitute Gavin Cooney left one between them as the game entered injury-time. Hugh McFadden and Jason McGee then grabbed a point apiece in time added on, to secure victory for Donegal.