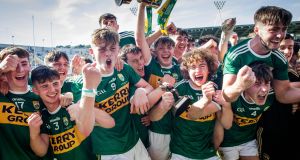 The Kerry team celebrate with the trophy. Photograph: Ryan Byrne/Inpho

Kerry’s dominance of minor football continued on Saturday evening as they added a sixth consecutive provincial title and a 27th consecutive championship win after a 20 point success over Clare in Pairc Uí Chaoimh.

The result may have been slightly flattering as the Kingdom didn’t necessarily fire on all cylinders and Clare managed to give Kerry an early scare when Jack Regan found Thomas Kelly with the perfect pass for the opening goal in the 11th minute.

But Dylan Geaney soon levelled the scores up and was then first to react when Paul Walsh’s free came back off the post to fire in Kerry’s first goal. With Kerry hitting their straps, nine different players - including all six forwards - contributed to their 1-15 to 1-2 half-time lead.

Kerry’s second goal came when Walsh dropped short and Geaney palmed the ball home while Walsh helped himself to his side’s third goal to stretch the lead to 3-17 to 1-5.

Clare did test Kerry goalkeeper Marc Kelliher on three occasions in the second period but he was equal to all their attempts at goal as Walsh finished with 1-7 (1-3 from play) in a man-of-the-match display. Kerry will play the Connacht runners-up in the All-Ireland quarter-finals with facing the Connacht champions.