How Dublin final challenge finishes off the rest of Leinster 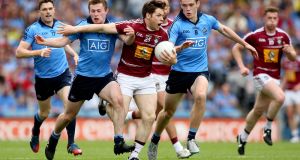 It is an uncomfortable reality for football in Leinster that the world at large would give longer odd on the lions in the Colosseum than on the Dubs in Croke Park on provincial final day.

You have to go back 17 years to find the last time they were beaten at this stage and since 2005 there has been just one defeat in the provincial championship. Since the county started winning All-Irelands again in 2011, finals have been won on an average margin of more than nine points and if you narrow the focus to the past four years, that margin rises to more than 13.

Not that surprising given the shortage of top-quality teams in the province, four of Dublin’s beaten opponents in the past seven years have been Division Two and the other three from Division Three. Sunday brings the first finalists from Division Four since Offaly 21 years ago.

For many of these counties it’s a daunting task, in many cases the biggest crowd they’ll play before and the most daunting opponents, this year hoping to become just the third county in history to win four All-Irelands in succession.

Laois are this year’s Leinster final opponents, well salvaged after a poor couple of years by Kerry coach John Sugrue, who has brought promotion to Division Three and a first Leinster final in 11 years.

What can they expect?

Tom Cribbin managed Westmeath to two finals in 2015 and ’16 when they lost by 13 – Dublin’s tightest margin in that year’s provincial championship – and 15 points, respectively.

“I don’t know what it is,” he says, “but when you’re playing Dublin half the battle is getting over the psychology: who they are, what they’ve achieved and what they’re doing in Division One of the league and now, how they’re going for four-in-a-row. To get your head around that for a lot of guys is difficult. No matter who else you’re facing it doesn’t seem to be the same.

“Dublin seem to be the one team that are able to perfect the approach that no matter who they’re playing, they respect them, do their homework on them and go out and treat it like it could be their last game.

“They just deliver and it’s not until they’re 10, 15 points ahead that they take the foot off the pedal. I suppose it’s down to the competition within the panel – everyone has an All-Ireland U-21 or senior medal.”

Jason Ryan also managed Wexford into two Leinster finals albeit that the first was in the era’s pre-history of 10 years ago. The second was seven years ago when Dublin were on the way to a first All-Ireland in 16 years and Ryan’s team pushed them all the way, losing by just a score, a goal by James McCarthy.

“For anyone playing against Dublin,” he says, “you’ve prepared and trained for a big performance. For a lot of teams in the lower divisions, you’re hoping for that performance and that Dublin are going to have an off-day – that’s the reality.

“You’re hoping that a few things aren’t going to go well for them or backfire or misfire and that with your own team, everything you practise and all of your match-ups work and that all of your players stay fit and that how you plan to set up tactically proves to be appropriate.

“Where Dublin have evolved so much even over the last two or three years is that regardless of what’s being thrown at them, they adjust.

“If a team starts with a lot of bodies behind the ball and then changes or a team presses kick-outs right up, they adapt or if a team puts on no pressure until the 45-metre line and then starts hitting you right, left and centre, making as much contact as possible they’re able to deal with that. They’ve become much better decision-makers. That makes it more challenging for Laois.”

That’s just on the day. Another aspect of the challenge is that teams beaten by Dublin in the Leinster final since 2011 have a zero rate of progress in the qualifiers. Beaten provincial finalists in general don’t have the best of records at that level but the hit rate in the other three provinces has been slightly over 50 per cent.

Cribbin disputes that Westmeath were demoralised by losing to Dublin:

Paradoxically for Ryan, that first final in 2008 – Wexford’s first since 1956 – ended in a 23-point destruction but they went on to break new ground, reaching the All-Ireland semi-finals and actually outlasting Dublin in that year’s championship.

Losing in 2011 by three points appeared to take more of a toll.

“How you bounce back is a very individual thing,” he says.

“In 2008 there was a very strong group of players. They themselves said, ‘enough is enough; we’ve got this far and the season’s gone well enough up to this point. Today wasn’t a good day. Let’s regroup and give the qualifiers a go’

“But they would have gone into the Dublin game thinking they had a chance of winning but within a short space of time you become aware that this is going to be a big mountain to climb.

“In 2011 the game was much closer but there was huge psychological baggage afterwards: could have, should have, might have, didn’t. That affects the focus.”

Neither Cribbin nor Ryan hold out a lot of hope for Laois while at the same time rating it as a good year for the county so far. Cribbin summarises.

“It’s all bonus territory for them from here,” he says. “They’ve taken the steps they need to take and let’s be honest: a Division Four team is not going to beat Dublin and that’s no disrespect. If anyone’s going to do it, it will be a Division One team used to playing consistently to that standard.”