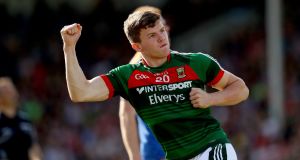 Mayo’s championship bandwagon continues on its merry way but found its roadworthiness put to a serious test in Semple Stadium on Saturday evening before emerging with a pass.

It wasn’t until the fourth quarter that last year’s All-Ireland runners-up were able to put some daylight between themselves and a serious Tipperary team, scoring 1-8 without reply between the 51st minute and the end to put themselves into the round three qualifier draw on Monday.

Despite having to make the long journey from the west to unfamiliar territory in Thurles, Mayo fans significantly outweighed the home numbers in the 11,257 attendance, evidence of which could be heard as the teams made their respective entrances onto the baked turf.

And it was the boys of so many summers, Mayo, who seemed to find conditions more to their liking early on as they burst into a 0-4 to 0-0 lead within minutes of the throw-in; the O’Shea brothers looking imperious along with Kevin McLoughlin, while their half-back partnership was as solid as ever.

But Tipp gradually came into it, a Philip Austin point and then a flicked goal by Michael Quinlivan from a long Josh Keane ball getting them up and running. For the rest of the half they hassled and harried, giving Mayo no space and frustrating several attacking attempts with their tackling and blocking. Alan Campbell stuck to reigning footballer of the year Andy Moran like velcro, affording him little chance to fire over those long, raking shots which lit up 2017.

Quinlivan almost had another goal after a catch and turn, his low shot well stopped by David Clarke, but then the closing minutes of the first half went badly for the favourites. First, Mayo lost Séamus O’Shea to injury, a suspected broken arm; then Quinlivan curled one over almost from the endline, the score confirmed by Hawkeye, and after Colm Boyle departed thanks to a needless black card, Mayo were probably relieved to hear the half-time whistle, down by 1-7 to 0-8.

Tipp kept their noses in front in the third quarter, Quinlivan, Sweeney and McGrath keeping the scoreboard moving, with Bill Maher and Jack Kennedy helping the cause, but a soft Mayo goal through James Durcan, his shot floating to the top corner, tied the scores up in the 52nd minute.

McLoughlin put the visitors ahead shortly afterwards and they then went on their unanswered spree until the final whistle with Jason Doherty and McLoughlin particularly enjoying themselves while Lee Keegan also added a point to cap a typically industrious shift.